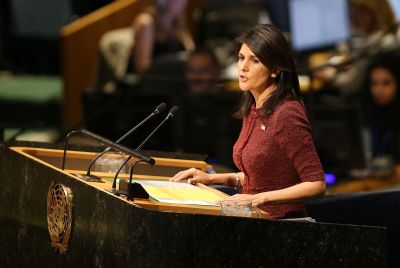 U.S. Ambassador Niki Haley (File photo)
"The United States will no longer provide more than a quarter of the funding for the United Nations's peacekeeping efforts, U.S. Ambassador to the U.N. Nikki Haley told the organization Wednesday.

'The United States has long been the largest financial contributor to U.N. peacekeeping by far. That will not change,' Haley said.

But Haley cautioned that 'peacekeeping is a shared responsibility.'

'With shared responsibility comes shared burdens and shared costs. One country should not shoulder more than one-quarter of the U.N. peacekeeping budget.'

As a result, she said, the U.S. will not pay more than 25 percent of the U.N. peacekeeping budget moving forward. The U.S. will work with other members of the organization to ensure the budgetary changes are made in a 'fair and sensible manner.'...

The U.S. is the largest financial contributor to the U.N.'s peacekeeping operation, covering roughly 28 percent of its $8 billion in costs. The next largest contributor is China, which funds 10.25 percent of the costs...