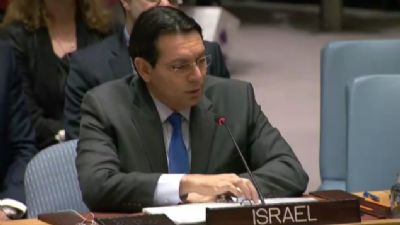 The emergency meeting was called by Security Council member Kuwait in the wake of the violence that unfolded Friday, including the death of more than a dozen Palestinians in clashes with IDF troops amid a mass protest on the Israel-Gaza border.

The Security Council meeting took place on Friday evening, when Jews worldwide were sitting down to the traditional holiday feast. The Israeli delegation was not in attendance, due to its members' observance of the Jewish holiday, during which work is prohibited.

'The State of Kuwait, with full knowledge that our permanent mission, Israel and Jews everywhere were observing the first night of Passover, hijacked the consultations, forced an open session and invited the Palestinian delegation to present remarks that they had been advised to prepare well in advance. Israel was not given the same advance notice and was barred from taking part in the deliberations due to the observance of our religious holiday,' wrote Ambassador Danon. 'I would like to remind the Council that exploiting procedural rules so that one side can make its case while the other cannot is antithetical to the spirit of the United Nations and is a direct affront to the fundamental principles of honest deliberation.'..."
Date
April 1, 2018
Title
Israeli envoy lodges complaint over Passover UN security council meeting, The Jerusalem Post
Original Source
http://www.jpost.com/Arab-Israeli-Conflict/gaza-news/Israeli-envoy-lodges-complaint-over-UN-security-council-meeting-on-Passover-547617
Attachment
Click here to view this article in MS Word/PDF format