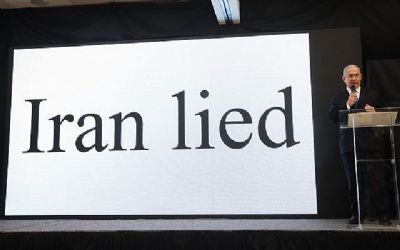 Prime Minister Benjamin Netanyahu giving a speech on files obtained by Israel proving Iran lied about its nuclear weapons program, April 30, 2018
"Israeli Prime Minister Benjamin Netanyahu said Monday Israel had obtained thousands of Iranian documents detailing Tehran's past nuclear weapons development program and showing what he said was a failure by Iran to declare those activities before signing on to an international nuclear agreement.

In an elaborate and sometimes theatrical presentation including full-screen slides and video clips of various Iranian leaders denying the existence of a nuclear weapons program, Netanyahu spoke first in English and then in Hebrew.

He presented as evidence of Iran's nuclear weapons initiative a trove of documents he said were acquired by Israeli intelligence from a secret storage location in south Tehran.

The remarks came before a May 12 deadline when U.S. President Donald Trump is set to decide on whether to withdraw from the international deal on Iran's nuclear program.

'This is a terrible deal,' Netanyahu said. 'It should never have been concluded. And in a few days' time, President Trump will decide -- will make his decision on what to do on the nuclear deal. I'm sure he'll do the right thing -- the right thing for the United States, the right thing for Israel, and the right thing for the peace of the world.'..."
Date
April 30, 2018
Title
Israeli Prime Minister Benjamin Netanyahu: Iran lied about nuclear program, ABC News
Author(s)
Matt McGarry
Original Source
http://abcnews.go.com/International/israeli-prime-minister-benjamin-netanyahu-iran-lied-nuclear/story?id=54831057
Attachment
Click here to view this article in MS Word/PDF format