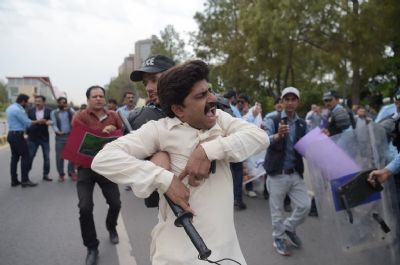 The postponement was raised at Thursday's official U.N. event marking World Press Freedom Day, where Secretary-General Antonio Guterres said in a video message that the service of the media to the public 'is invaluable.'

Robert Mahoney, deputy executive director of the Committee to Protect Journalists ... said unfortunately 'as we battle censorship around the world ... the panel was cancelled because one of the presenters was going to mention by name countries that jail journalists.'

'So we have a discussion in the U.N. about battling censorship, being censored, that's quite ironic,' he said. 'I would call on us all here present to resist the politicization - the increasing politicization of U.N. agencies whose mission is to defend press freedom.'

The United Nations Alliance of Civilizations organized the panel which included about a dozen prominent journalists and media experts in collaboration with the News Literacy Project... Alan Miller, the project's founder, said in a statement that the panel was postponed after his organization refused a request from the Alliance of Civilizations to remove references from a video it wanted to present to several countries that restrict press freedom including Turkey, Mexico, Egypt, Russia and Pakistan.

'I could not permit this censorship of our presentation due to the stated concern that it would offend one or more countries engaged in repression and violence against journalists,' Miller said in a statement..."
Date
May 3, 2018
Title
Accusations of censorship at UN on World Press Freedom Day, Associated Press
Author(s)
Edith M. Lederer
Original Source
https://apnews.com/0c31d2809c1c4bd7a5472bbdacc97983
Attachment
Click here to view this article in MS Word/PDF format