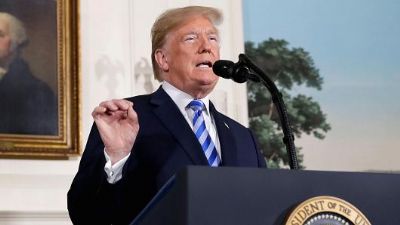 President Donald J. Trump, May 8, 2018
At a press conference held on May 8, 2018, President Trump announced that he was pulling the United States out of the Joint Comprehensive Plan of Action (JCPOA), also known as the Iran nuclear deal. He also announced that he would reimpose sanctions on Iran that had been lifted under the agreement. In his words:

"The Iranian regime is the leading state sponsor of terror. It exports dangerous missiles, fuels conflicts across the Middle East, and supports terrorist proxies and militias such as Hezbollah, Hamas, the Taliban, and al Qaeda.

Over the years, Iran and its proxies have bombed American embassies and military installations, murdered hundreds of American servicemembers, and kidnapped, imprisoned, and tortured American citizens. The Iranian regime has funded its long reign of chaos and terror by plundering the wealth of its own people.

No action taken by the regime has been more dangerous than its pursuit of nuclear weapons and the means of delivering them.

In 2015, the previous administration joined with other nations in a deal regarding Iran's nuclear program. This agreement was known as the Joint Comprehensive Plan of Action, or JCPOA.

In theory, the so-called 'Iran deal' was supposed to protect the United States and our allies from the lunacy of an Iranian nuclear bomb, a weapon that will only endanger the survival of the Iranian regime. In fact, the deal allowed Iran to continue enriching uranium and, over time, reach the brink of a nuclear breakout.

The deal lifted crippling economic sanctions on Iran in exchange for very weak limits on the regime's nuclear activity, and no limits at all on its other malign behavior, including its sinister activities in Syria, Yemen, and other places all around the world.

In other words, at the point when the United States had maximum leverage, this disastrous deal gave this regime - and it's a regime of great terror - many billions of dollars, some of it in actual cash - a great embarrassment to me as a citizen and to all citizens of the United States...

The Iran deal is defective at its core. If we do nothing, we know exactly what will happen. In just a short period of time, the world's leading state sponsor of terror will be on the cusp of acquiring the world's most dangerous weapons.

Therefore, I am announcing today that the United States will withdraw from the Iran nuclear deal.

In a few moments, I will sign a presidential memorandum to begin reinstating U.S. nuclear sanctions on the Iranian regime. We will be instituting the highest level of economic sanction. Any nation that helps Iran in its quest for nuclear weapons could also be strongly sanctioned by the United States.

America will not be held hostage to nuclear blackmail. We will not allow American cities to be threatened with destruction. And we will not allow a regime that chants 'Death to America' to gain access to the most deadly weapons on Earth..."
Date
May 8, 2018
Title
Remarks by President Trump on the Joint Comprehensive Plan of Action, White House Press Release
Original Source
https://www.whitehouse.gov/briefings-statements/remarks-president-trump-joint-comprehensive-plan-action/
Attachment
Click here to view this article in MS Word/PDF format