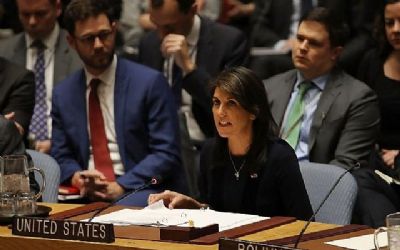 U.S. Ambassador to the United Nations Nikki Haley (File photo)
"Last week, Iranian forces attacked Israeli positions on the Golan Heights by launching rockets from Syria. This was a reckless provocation and escalation that must be stopped. It is an example of regional violence that should occupy our attention here in the Security Council... In recent days, Hamas terrorists, backed by Iran, have incited attacks against Israeli security forces and infrastructure. That is violence that should occupy our attention, too.

The common thread in all of this is the destabilizing conduct of the Iranian regime â a regime that insists on promoting violence throughout the Middle East, while depriving its own people of basic human rights.

The United States welcomes a discussion of this violence in the Middle East. We welcome discussing the ways we can cooperate with each other to put an end to this violence.

There is far too little discussion in the Security Council on Iran's destabilizing presence in Syria, its promotion of violence in Yemen, its support for terrorism in Gaza, and its dangerous and illegal weapons buildup in Lebanon.

However, in the minds of some, today's meeting was not called to discuss any of those examples of violence in the Middle East. Today's meeting was called to discuss the violence that some suggest was connected with yesterday's opening of the United States' embassy in Jerusalem. For some people, the embassy opening is said to be a reason to engage in violence. How is that justified?...

But let's remember that the Hamas terrorist organization has been inciting violence for years, long before the United States decided to move our embassy... This is what is endangering the people of Gaza. Make no mistake: Hamas is pleased with the results from yesterday. I ask my colleagues here in the Security Council, who among us would accept this type of activity on your border? No one would. No country in this chamber would act with more restraint than Israel has. In fact, the records of several countries here today suggest they would be much less restrained..."
Date
May 15, 2018
Title
Remarks by Ambassador Nikki Haley at a UN Security Council Emergency Meeting on Violence in the Middle East, U.S. Mission to the United Nations
Original Source
https://usun.state.gov/remarks/8431
Attachment
Click here to view this article in MS Word/PDF format