Why the U.N. should condemn Hamas 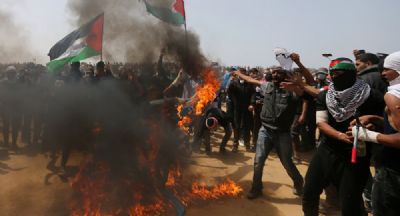 Palestinian rioters at the Gaza border
"In recent weeks, Israel has faced violence at the security fence separating our country from Gaza. Tens of thousands of Palestinians, incited by Hamas (which controls Gaza), have approached the fence -- some of them armed with guns, improvised explosive devices and Molotov cocktails to harm Israeli civilians -- to tear down any obstacle in their way and infiltrate Israel.

Rioters have used burning tires and kites to set fires across Israel's southern farms and have succeeded at times at damaging critical civilian infrastructure. Hamas has coupled its violence with a widespread public relations effort aimed at repackaging the rioters as peaceful grass-roots-led protesters.

Sadly, too many have fallen for Hamas' ploys. Instead of directing their condemnations at this internationally recognized terrorist organization for their war crimes against both Palestinians and Israelis, some countries and UN bodies have not only embraced Hamas' propaganda but have even criticized Israel's right to self-defense. The Human Rights Council in Geneva has already passed such a measure, and there are additional attempts underway right now to pass a UN Security Council resolution aimed at curbing Israel's legitimate rights.

Such baseless charges against Israel are morally unjust. They are also a hindrance to those who truly seek to lower the tensions in the region. If the international community, starting with the United Nations, would instead rightfully choose to hold Hamas responsible for its war crimes and unequivocally condemn its dangerous behavior, then the United Nations and other international organizations could not only serve as a force for good but also enforce real change on the ground...

Members of the international community should not be falling prey to the lies of Hamas. The United Nations and others must use their power and resources to improve the situation on the ground in Gaza and enforce change. To do so they must start by condemning Hamas for attacking Israel and for holding the people of Gaza hostage. Such moral clarity will not only reinvigorate international institutions but also save lives on both sides of the fence."
Date
May 23, 2018
Title
Why the UN should condemn Hamas, CNN
Author(s)
Danny Danon
Original Source
https://www.cnn.com/2018/05/23/opinions/israel-what-the-un-should-do-about-hamas-danon-opinion/index.html
Attachment
Click here to view this article in MS Word/PDF format