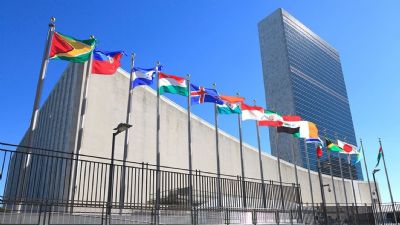 United Nations Headquarters
"The Palestinian Authority, which calls itself the State of Palestine, has taken new steps in its drive to join as many United Nations organizations as possible. Even as it does so, it's time for U.N. member states to recognize that this ploy does little or nothing to improve the lives of Palestinians or the prospects for peace, and will hurt organizations where the Palestinians have been accepted.

How will it hurt the organizations? Two U.S. laws passed in the 1990s prohibit providing federal funds to: (1) "the United Nations or any specialized agency thereof which accords the Palestine Liberation Organization the same standing as member states" or (2) the U.N. or to any U.N. affiliated organization that 'grants full membership as a state to any organization or group that does not have the internationally recognized attributes of statehood.'

The impact of the law can be devastating for U.N. organizations because Washington is generally the largest source of their financial support..."
Date
May 26, 2018
Title
Palestinian push hurts the Palestinian people and the UN organizations they join, Fox News
Author(s)
Brett D. Schaefer
Original Source
http://www.foxnews.com/opinion/2018/05/25/palestinian-push-hurts-palestinian-people-and-un-organizations-join.html
Attachment
Click here to view this article in MS Word/PDF format