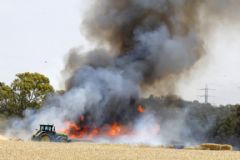 Israeli wheat and hay fields set ablaze by Palestinian incendiary devices along the Gaza border fence
"After the UN General Assembly on June 14, 2018, voted to condemn Israel for its handling of the Gaza border fence violence, it is all the more curious to observe the deliberate disregard of the serious and flagrant international humanitarian, environmental, and ecological crimes committed by Hamas and the Palestinians.

Since the Palestinian Authority is utilizing the events in Gaza to conduct its own political and legal campaign against Israel in international bodies, this renders the Palestinian leadership an accessory to Hamas in the commission of these crimes...

Incendiary kites and balloons have ignited vast swathes of agricultural land in Israel, destroyed crops, and endangered Israeli residents. The International Criminal Court Statute defines as a war crime 'extensive destruction and appropriation of property, not justified by military necessity and carried out unlawfully and wantonly.'

From the viewpoint of international humanitarian law and accepted norms of humanity, placing Palestinian civilians, and especially women and children, at the forefront of violent demonstrations and attacks on the border fence as human shields to conceal the presence of Hamas terrorists is a violation of several international treaties protecting children and prohibiting their involvement in warfare.

Weaponizing kites and balloons by attaching explosive devices with the intention that they will explode upon landing or when found by Israeli civilians is a flagrant violation of international humanitarian law, notably the 1997 Convention for the Suppression of Terrorist Bombings. Moreover, the 2001 Conventional Weapons Convention prohibits the use of incendiary weapons.

The Palestinian leadership must be made to understand that its fixation with joining international treaties is not unidirectional. It involves solemn responsibilities to abide by the obligations included in such treaties. The international community must hold the Palestinian leadership to their commitments and not ignore their violations of the most fundamental norms and principles of international law..."
Date
June 17, 2018
Title
The Many Ways Palestinians Violate International Law, Jerusalem Center for Public Affairs
Author(s)
Alan Baker
Original Source
http://jcpa.org/article/the-many-ways-the-palestinians-violate-international-law/
Attachment
Click here to view this article in MS Word/PDF format