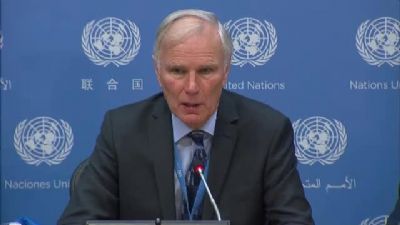 U.N. Special Rapporteur Philip Alston speaking at a press conference on October 25, 2016
"Last month, the United Nations released a report about poverty in America. A single researcher spent two weeks in our country, visiting four states, Puerto Rico, and Washington, D.C. His report was harshly critical, condemning America for 'punish[ing] those who are not in employment,' among other farcical notions.
...
Instead, the U.N. might have studied poverty in the Congo, where 60 percent of the entire population lacks the basics of food and electricity. Or Burundi, where the typical annual income is $280. Or Venezuela, where narco-state dictators have driven a once prosperous country into the ground with an inflation rate over 25,000 percent, and where diseases that were once thought eliminated are now reappearing.

When there are many dozens of countries where poverty consumes most of the population, and where corrupt governments deliberately make the problem much worse, why would the U.N. study poverty in America? The answer is politics.

Take a closer look at what the U.N. report says we should do about poverty. It reads like a socialist political manifesto of higher taxes, government-run health care, and 'decriminaliz[ing] being poor' (never mind that nowhere in America is it a crime to be poor).

The report also distorts and misrepresents the facts about poverty in America in ways that a biased political opponent might. For example, it states that 18.5 million Americans live in 'extreme poverty' and 5.3 million live in 'Third World conditions of absolute poverty.' In fact, these numbers fail to incorporate the vast majority of welfare assistance provided to low-income households, such as food stamps, Medicaid, and refundable tax credits. The report also exaggerates poverty by excluding pension and Social Security assets from its calculations. The truth is that America's median household income has hit record highs. Wages have risen faster under President Trump for low- and middle- income earners than for high earners. And for the first time on record America now has more job openings than unemployed workers.
...
In the past year and a half, the United States has cut almost $800 million from the U.N. budget by eliminating wasteful and duplicative spending. This is important because while America is just one of 193 countries at the U.N., we pay about one-quarter of the entire U.N. budget. When the U.N. wastes American tax dollars, like it did on this unnecessary, politically biased, and factually wrong report, we're going to call it out for the foolishness that it is."
Date
July 9, 2018
Title
The United Nations’ Patently Ridiculous Report on American Poverty, National Review
Author(s)
Nikki Haley
Original Source
https://www.nationalreview.com/2018/07/united-nations-report-on-american-poverty-distorts-and-misrepresents/
Attachment
Click here to view this article in MS Word/PDF format