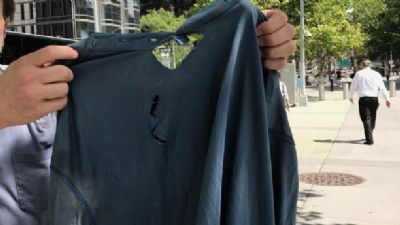 Lee with the shirt he says was torn when he was removed from the U.N. by security
"United Nations security allegedly roughed up, tossed out and temporarily banned a reporter from its New York headquarters this week -- the latest incident in what a watchdog has described as a 'long history of harassment' against him.

Matthew Lee, who runs the online Inner City Press blog, has long been a thorn in the side of many U.N. officials with his combative and relentless style of reporting. 'ICP' puts out several lengthy stories a day about U.N. proceedings, with a particular emphasis on corruption, incompetence and lack of accountability at the international body...

And so on Tuesday, Lee hovered outside a late-night, closed-door hearing on the U.N. peacekeeping budget. Other outlets had reported that the budget had been agreed on over the weekend, suggesting a looming stalemate had been broken. But Lee's reporting suggested things might not be so clear cut.

Partial video of the incident taken on his phone shows Lee chatting with a committee member -- but it then cuts to a few minutes later when a scuffle can be heard. He claims that his shirt was torn, his computer damaged and his arm twisted by a security guard as he was trying to write a story about his conversation.

A man he identified as an assistant secretary general can be heard telling him the committee hearing is closed, though Lee said he never tried to enter the room and was just reporting near the room.

On Thursday, he returned to work but was denied access to the building, though he was not informed why or if it was a temporary or permanent restriction...

After he was removed from the building last month, the Government Accountability Project expressed alarm over the incident, saying it was unexplained and part of a 'long history of harassment' against Lee.

The GAP noted that he had broken stories about the role of U.N. peacekeepers in bringing cholera to Haiti, as well as war crimes in Sri Lanka, Burundi and Sudan.

'The Government Accountability Project is deeply concerned about the mistreatment of Matthew Lee for two reasons. First, he has covered U.N. whistleblower cases accurately and in detail, and we regard the mistreatment of him as retaliatory,' the GAP said.