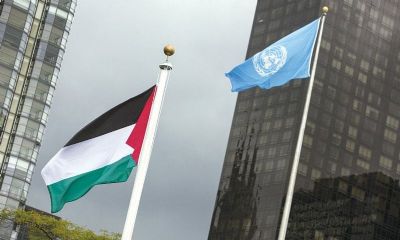 Palestinian flag (left) next to U.N. flag
"International legal scholar Eugene Kotorovich argues in a new paper that the U.S. must, by law, withdraw $40 million in funding from two United Nations agencies because they granted membership to the Palestinian Authority (PA).

The agencies are the United Nations Conference on Trade and Development (UNCTAD) and the Organization for the Prevention of Chemical Weapons (OPCW), which the PA joined in May.

U.S. law theoretically prevents American taxpayers from funding U.N. bodies that admit 'Palestine' as a member state, because it is not a state and because the U.S. wants to encourage Palestinians to seek statehood through negotiations with Israel...

He told Breitbart News on Wednesday:

'U.S. law bans funding U.N. organizations that give the PLO the status of a member state. But President Obama refused to apply the law when they joined one such organization two years ago. Not surprisingly, they have since joined three more. The State Department must restore American credibility by stopping funding to all these U.N. agencies. The constitutional primacy of Congress in deciding how taxpayer money is spent is what is at stake here. And if some should object that defunding these U.N. bodies would interfere with valuable work they do, that is something the U.N. obviously has decided is less important than helping Palestinian unilateralism.'..."
Date
July 11, 2018
Title
Expert: U.S. Must Pull $40 Million from U.N. Agencies over Palestinian Membership, Breitbart
Author(s)
Joel Pollack
Original Source
https://www.breitbart.com/big-government/2018/07/11/expert-u-s-must-pull-40-million-from-u-n-agencies-over-palestinian-membership/
Attachment
Click here to view this article in MS Word/PDF format