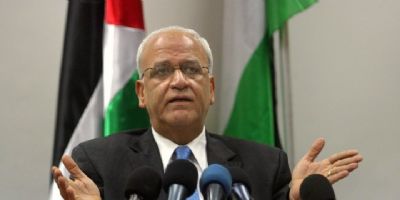 Saeb Erekat (File photo)
"The Palestinian Authority is weighing a UN General Assembly Resolution to rescind Israeli membership in the international body, which first recognized it as a state in 1948... PLO Executive Committee Secretary-General Saeb Erekat said on Thursday...

He sat behind a folding table with a handheld microphone and told the diplomats who sat in front of him that they could have 'a test very soon in the UN General Assembly about this.'

According to the UN website, the Security Council would also have to vote on the matter. Such a move would most certainly be torpedoed by the United States, one of five permanent members that has veto power in the council.

The PA has already submitted a question to the UN's legal department to see if the nation-state law was in keeping with the organization's charter, Erekat said.

It is also expected to seek an option on the matter from the International Court of Justice at The Hague, which in 2004 issued an advisory opinion that Israel's construction of the security fence was illegal..."
Date
July 27, 2018
Title
PA may ask U.N. General Assembly to oust Israel, The Jerusalem Post
Author(s)
Tovah Lazaroff
Original Source
https://www.jpost.com/Arab-Israeli-Conflict/PA-may-ask-UN-General-Assembly-to-oust-Israel-563569
Attachment
Click here to view this article in MS Word/PDF format