Is a Historic Decision on UNRWA Imminent? 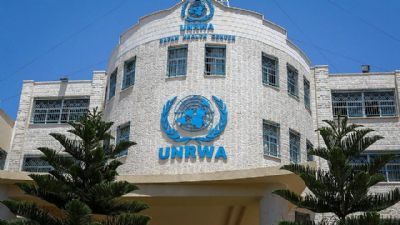 An UNRWA office building
"EXECUTIVE SUMMARY: The next few weeks could be remembered in the annals of the Israeli-Palestinian conflict as historic. The US administration is due to decide at the beginning of September whether to stop its funding for the United Nations Relief and Works Agency for Palestine Refugees in the Near East (UNRWA). Such a decision could be as significant as Harry Truman's decision to recognize the State of Israel just 11 minutes after the Jewish State declared its independence in May 1948.
...
The US supported UNRWA for decades, even though it knew the agency is a disruptive organ that harms the prospects for peace, keeps the Palestinians locked in a trap of dependency, and threatens Israel's security. UNRWA lists over 5 million Palestinians as 'registered refugees' and has long encouraged them to dream that someday they will resettle in Israel. This falsehood â the most significant obstacle to achieving peace â is a euphemism for the Arab desire to completely undo the State of Israel. The US, along with other Western powers, continued to sustain UNRWA all these years as a means of appeasing the Arab world. UNRWA is thus a relic of the Cold War era.

For the past few decades, the West has treated the Arab-Israeli conflict as a territorial dispute. Since the June 1967 war, the prevailing motto was 'land for peace,' which meant that in return for territory, Israel would receive peace from its neighbors. An American decision to withdraw from UNRWA would signify that the US believes the dispute to be not territorial but existential. By addressing the core ethos of the Palestinians â that the entire land is theirs, and therefore all 'registered refugees' should be entitled to 'return' â the Trump administration could make an invaluable contribution to Israel's security as well as to the prospects for future peace. Only by dealing directly with the intransigent worldview of the Palestinians, as epitomized by the 'refugee' problem and the Palestinians' demand for the 'right of return,' will peace be possible in the future.

This would be the first time the Palestinians pay a price for their intransigence. Up to now, they have been encouraged to harden their position every time they refuse a peace deal offered to them by Israel. When they said no to Ehud Barak's peace proposal at Camp David in July 2000, they received a better offer from Bill Clinton a few months later. When they refused that offer, they were offered another, still better deal by Ehud Olmert in 2007-2008. They refused that offer as well. The inner logic of the peace process until now was that the Palestinians might as well keep on saying no, since doing so brings them better offers..."
Date
August 29, 2018
Title
Is a Historic Decision on UNRWA Imminent?, The Begin-Sadat Center for Strategic Studies
Author(s)
Adi Schwartz
Original Source
https://besacenter.org/perspectives-papers/unrwa-historic-decision/
Attachment
Click here to view this article in MS Word/PDF format