Jews expelled from Arab states call on U.N. to recognize their plight after 70 years 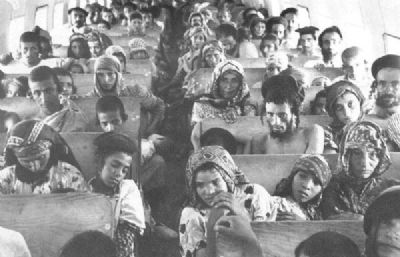 Jews from Yemen are transported in a rescue operation by Israel shortly after independence
"Seventy years after the exodus and expulsion of some 850,000 Jews from Arab states and Iran, the heads of communities of Jews from Arab countries are demanding the United Nations officially recognize the suffering they were forced to endure.

In a letter to U.N. Secretary General Antonio Guterres, community leaders, among them Dr. Shimon Ohayon, director of Bar-Ilan University's Dahan Center and chairman of the Alliance of Moroccan Immigrants wrote, 'While the U.N. organizes events to mark the departure of 450,000 Palestinians from Israel upon the establishment of the state, following a war imposed on Israel, we do not see recognition of the expulsion of Jews from Arab countries...We therefore seek to establish a memorial day for the Jews' expulsion from Arab lands.'..."
Date
November 27, 2018
Title
Jews expelled from Arab states call on UN to recognize their plight, Israel Hayom
Author(s)
Ariel Kahana
Original Source
http://www.israelhayom.com/2018/11/27/jews-expelled-from-arab-states-call-on-un-to-recognize-their-plight/
Attachment
Click here to view this article in MS Word/PDF format