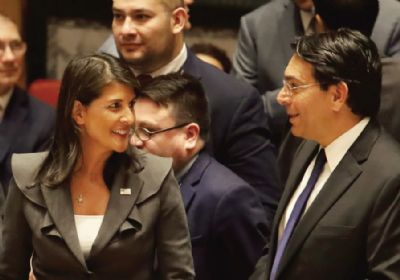 The General Assembly is expected to vote Friday or possibly Monday on the proposed resolution condemning rocket firings into Israel and demanding that Hamas end the use of violence.

Israel's Ambassador Danny Danon told reporters that US diplomats were in talks with their EU counterparts on the draft text. European backing would significantly boost chances of approval by the 193-nation body.

'The US is negotiating the language with the EU,' Danon told a briefing. 'For us it's very symbolic to have this resolution presented with the support of the EU.'

If adopted, it would mark the first time that the assembly has voted to condemn Hamas, the Islamist terror group that has ruled the Gaza Strip since 2007..."
Date
November 27, 2018
Title
US lobbies Europe to back United Nations vote on condemning Hamas, The Times of Israel
Author(s)
AFP
Original Source
https://www.timesofisrael.com/us-lobbies-europe-to-back-un-vote-on-condemning-hamas/
Attachment
Click here to view this article in MS Word/PDF format