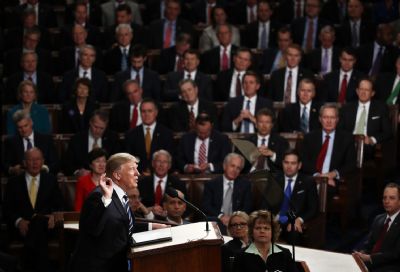 U.S. President Donald Trump speaking to Congress (File photo)
"The recent decision by Airbnb to stop its services for Jews living in the West Bank of Israel is being met with criticism by the Trump administration and pro-Israel leaders on Capitol Hill, according to sources who spoke to the Washington Free Beacon about the company's choice to join the anti-Israel Boycott, Divestment, and Sanctions movement, or BDS, which aims to wage economic warfare on the Jewish state.

Airbnb, a growing tech company that allows travelers to rent lodging across the globe, announced that it removed some 200 Jewish-owned rental homes in the West Bank, sparking fury in pro-Israel circles.

The deepening controversy over Airbnb's decision to join the BDS movement is beginning to be discussed within the Trump administration and its allies on Capitol Hill, who could potentially penalize company. Already, there is discussion that Airbnb's move could trigger state and federal laws barring discrimination based on religion and ethnicity.

A State Department official, speaking to the Free Beacon about the matter, categorically rejected Airbnb's boycott.

'The administration's strong opposition to boycotts, divestitures, and sanctions is well-known,' the official said.

On Capitol Hill, Trump administration allies are turning their attention to Airbnb. The move to delist Jewish homes could provide the momentum necessary for Congress to finally pass anti-boycott legislation that has long been stalled.

'Airbnb's actions, sadly, have contributed to the rising tide of anti-Semitism that we've seen happening all over the world,' Sen. Ted Cruz (R., Texas), a vocal pro-Israel champion, told the Free Beacon. 'They caved to pressure from the anti-Israel boycott movement, which promotes falsehoods in its campaigns against the world's only Jewish state.'

'This kind of persecution has no place in any society and must end,' Cruz said. 'Airbnb should reverse its decision, and I will continue to work with my colleagues to combat anti-Semitism here and abroad.'..."
Date
November 28, 2018
Title
Trump Admin, Congress Slam Airbnb Boycott of Israel as ‘Anti-Semitic’, Free Beacon
Author(s)
Adam Kredo
Original Source
https://freebeacon.com/national-security/trump-admin-congress-slam-airbnb-boycott-israel-anti-semitic/
Attachment
Click here to view this article in MS Word/PDF format