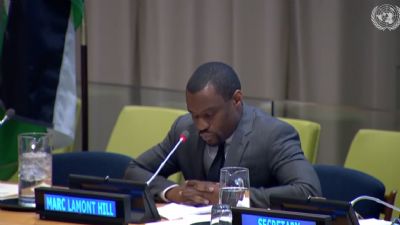 CNN commentator and Temple University professor Marc Lamont Hill at the United Nations
"A CNN commentator lambasted Israel in a U.N. speech that drew applause from world leaders on Wednesday, while calling for a 'free Palestine from the river to the sea' -- language critics describe as a dog whistle advocating the elimination of Israel.

Marc Lamont Hill made the remarks during a special meeting of the Committee on the Exercise of the Inalienable Rights of the Palestinian People in observance of the International Day of Solidarity with the Palestinian People.
...
Anne Bayefsky, director of the Touro Institute on Human Rights and the Holocaust and President of Human Rights Voices, told Fox News that Hill's speech was an 'especially obscene U.N. moment that reveals the true nature of the anti-Israel and anti-Jewish animus of the modern United Nations.'

'Hill's call at the United Nations for the destruction of the Jewish state was not some accident. He didn't misspeak. He was an invited guest. He was the only person invited to speak as 'the' representative of 'civil society.' When he ended his extraordinary tirade with 'Give us a free Palestine from the river to the sea' his words were met by a round of applause. The only applause for any speaker,' she said."
Date
November 29, 2018
Title
CNN commentator accused of dog-whistling for Israel’s elimination in well-received U.N. speech, Fox News
Author(s)
Adam Shaw
Original Source
https://www.foxnews.com/politics/cnn-commentator-accused-of-dog-whistling-for-israels-elimination-in-well-received-un-speech
Attachment
Click here to view this article in MS Word/PDF format