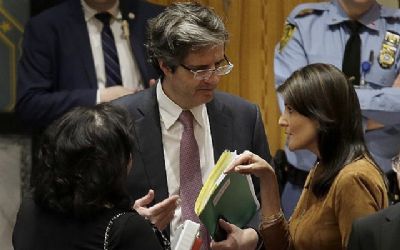 The draft resolution will likely be voted on in the United Nations General Assembly on Monday, an official in Israel's mission to the UN told The Times of Israel on Thursday.

After the US agreed to make some changes to the initial draft, the EU on Thursday agreed to support the text. All 28 EU member states are expected to vote in favor.

'All 28 members will support the US text,' a European diplomat told AFP.

If adopted, the resolution would be the first General Assembly vote to condemn the Palestinian terrorist group. The EU's support dramatically increases its chances of passing, though it is unclear whether it will guarantee the needed simple majority among the UN's 193 member states..."
Date
November 30, 2018
Title
Europe agrees to back UN resolution condemning Hamas terror group, The Times of Israel
Author(s)
Raphael Ahren
Original Source
https://www.timesofisrael.com/europe-agrees-to-back-un-resolution-condemning-hamas/
Attachment
Click here to view this article in MS Word/PDF format