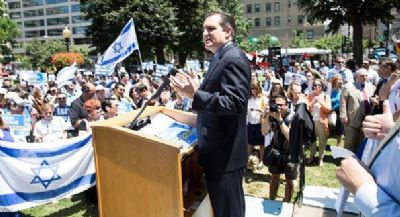 Senator Ted Cruz (File photo)
"Sen. Ted Cruz, R-Texas, has called on the Trump administration to act on two laws that demand automatic defunding of U.N.-affiliated agencies that have allowed the Palestinians to join as a state.

The two laws, passed by Congress in the early 1990s, were meant to deter the U.N. and specialized agencies from accepting the Palestinians as a full member and not to allow groups that aren't recognized as a state to join.

In a statement to Fox News, Cruz said that 'Congress has spoken clearly and repeatedly," on the issue and that 'the Palestinian campaign is a diplomatic offensive against Israel that undermines the prospect for peace, and there must be consequences for U.N. entities that enable and promote that behavior.'

Cruz pointed to the most recent example of a U.N. agency allowing them to join: 'The law requires the Trump administration to restrict funding from agencies like the Universal Postal Union, and the administration should clearly convey to the Postal Union that it intends to enforce the law.'..."
Date
December 1, 2018
Title
Cruz calls on Trump administration to defund UN agencies that allow Palestinian membership, Fox News
Author(s)
Ben Evansky
Original Source
https://www.foxnews.com/politics/cruz-calls-on-trump-administration-to-defund-un-agencies-that-flaunt-us-law-by-allowing-palestinian-membership
Attachment
Click here to view this article in MS Word/PDF format