Iran has been caught causing terror in Europe once again 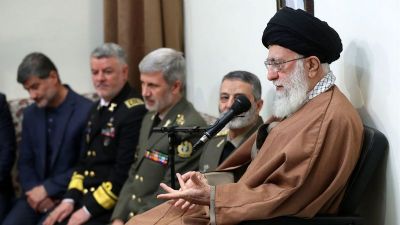 Iranian supreme leader Ayatollah Khamenei (right)
"The nuclear deal was supposed to chart a new course for Iran. But the Tehran Â¬regime remains as it ever was, including when it comes to committing acts of terror in Western homelands. Just don't expect Europe to reconsider its policy of preserving the nuclear deal at any cost.

This week, the Dutch government confirmed that Iran's intelligence ministry was behind two assassinations in the Netherlands - of Ahmad Mola Nissi in The Hague in November 2017 and Ali Motamed in Amsterdam two years earlier.

In this case, the mullahs allegedly hired Dutch gangland types to carry out the murders. As the US government has repeatedly emphasized, Hezbollah, Iran's Shiite terror proxy in Lebanon, has close connections with organized crime worldwide.

The Dutch bombshell followed October's announcement by the Danish government that it had thwarted an Iranian plan to assassinate a leader of the separatist Arab Struggle Movement for the Liberation of Ahvaz. Swedish Â¬authorities arrested a Norwegian citizen of Iranian extraction for his alleged role in the plot; he has been extradited to Denmark.

Tehran was also behind a foiled bombing in France last summer...

None of this is new behavior from the lawless Islamic Republic, which has treated terrorism as a central plank of its statecraft from the beginning..."
Date
January 9, 2019
Title
Iran has been caught causing terror in Europe once again, The New York Post
Author(s)
Kyle Orton
Original Source
https://nypost.com/2019/01/09/iran-has-been-caught-causing-terror-in-europe-once-again/
Attachment
Click here to view this article in MS Word/PDF format