Critics slam U.N. for pointing fingers at Israel in new report while not also condemning Hamas' use of human shields 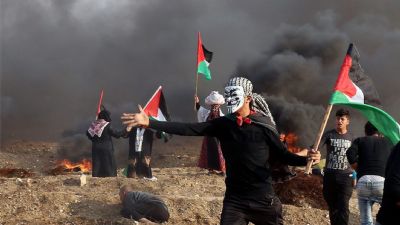 Palestinian rioters at the Gaza border (AP Photo/Adel Hana)
"It has almost been one year since the start of the Gaza-Israel border uprisings that left 189 Palestinians dead in a monthslong rash of violent demonstrations demanding an end to the blockade on Gaza and the right to return to their lands. To mark the March 30 anniversary, a three-person U.N. war crimes investigation team, as part of a Commission of Inquiry (COI), has released a report indicating that Israeli security forces committed possible war crimes and crimes against humanity, and this week called on Israelis to prevent snipers from using lethal force against demonstrators.

However, Israel supporters and U.N. critics have this week blasted the leading human rights body and the report for failing to illuminate alleged Hamas war crimes â in particular, the widespread and illegal use of human shields.

'Since the 2014 Gaza conflict, Hamas (has) used civilians as human shields for its own fighters. Similar tactics were successfully adopted by Hezbollah against Israel in their 2006 conflict,' Lt. Gen Richard Natonski, a retired U.S. Marine and member of the Hybrid Warfare Task Force at the Jewish Institute for National Security America (JINSA), told Fox News. 'The use of human shields in combat is contrary to Western thinking and the law of armed conflict. It's hard to imagine how this wasn't mentioned in the U.N. report, except for perhaps a certain bias by the authors of the report against Israel.'

JINSA has issued its own report, 'Defending the Fence: Legal and Operational Challenges in Hamas-Israel Clashes,' to counter the U.N. report's narrative.