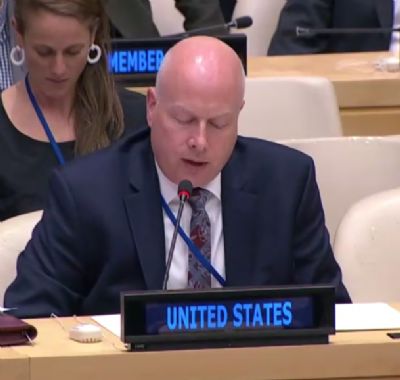 Jason Greenblatt at the United Nations, May 9, 2019
"It is baffling and disappointing to see the obvious, continual anti-Israel bias here. Here we are in an Arria session to condemn Israel, in the same halls where just a few months ago, Member States failed to condemn Hamas, a known terrorist organization that just a few days ago fired close to 700 rockets at Israel â including at hospitals and schools.

Hamas' stated goal is the destruction of Israel â plain and simple. And let's not forget its partner in violence â the Palestinian Islamic Jihad.

These terrorist groups intentionally fire missiles and mortars from densely populated civilian neighborhoods in Gaza to target Israelis and Israeli communities, and siphon the little resources of the people of Gaza to build their terror arsenal while preventing donor aid from reaching the people.

Time and again they put their own interest ahead of their own people. Yet here at the UN in December, the majority of members chose to defend Hamas rather than condemn them. It is truly shameful that in these halls there have been nearly 700 resolutions condemning actions of Israel â the region's only real democracy â yet not one condemning Hamas' attacks on Israelis or its abuse and neglect of the very people it purports to govern...

Palestinian leadership name schools, parks, and streets after terrorists who have murdered Israelis. Here, the UN can't agree to condemn Hamas, but we've also never had an Arria or session of any kind focused on Palestinian terrorism or incitement...

The truth is that today, on Israel's Independence Day, the United Nations Security Council has chosen to dwell in the comfort of 700 paper resolutions. And it has failed to confront the challenge of 700 very real dangerous weapons of war..."
Date
May 9, 2019
Title
Remarks by Jason Greenblatt, President Trump’s Special Representative for International Negotiations, at a UN Security Council Arria-Formula Meeting on Israeli Settlements, U.S. Mission to the United Nations
Original Source
https://usun.state.gov/remarks/9063
Attachment
Click here to view this article in MS Word/PDF format