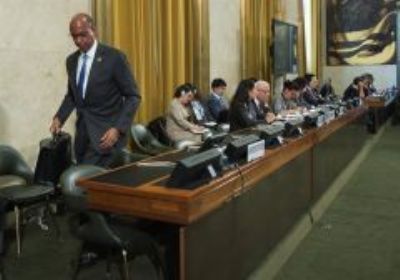 In Washington, State Department spokeswoman Morgan Ortagus declined to say whether the administration would act similarly at other international forums presided over by the regime â which it does not recognize â saying it would decide 'on a case-by-case basis.'

While the walkout was symbolic, she told a briefing, 'we think it's an important symbol to show that the United States does not stand with an illegitimate regime and that we won't be party to it.'

Ambassador Robert Wood and his delegation left the chamber as Jorge Valero, the representative of the Maduro regime, assumed the rotating presidency and began to speak.

The U.S. and more than 50 other countries recognize the head of the National Assembly, Juan Guaido, as Venezuela's interim president in accordance with the constitution, pending new elections...

The CD was established in 1979, with an agenda that includes weapons of mass destruction, reduction of armed forces and budgets, and the goal of eventual complete disarmament.

While not formally a U.N. body, it is serviced by the U.N., and its budget is included in that of the U.N. American taxpayers account for more than one-fifth of that U.N. budget..."
Date
May 29, 2019
Title
US Walks Out of UN-Linked Disarmament Body As Maduro Regime Assumes Presidency, CNS News
Author(s)
Patrick Goodenough
Original Source
https://www.cnsnews.com/news/article/patrick-goodenough/us-walks-out-un-linked-disarmament-body-maduro-regime-assumes
Attachment
Click here to view this article in MS Word/PDF format