IDF chief to UNIFIL: Stop Hezbollah's missile program, or we will 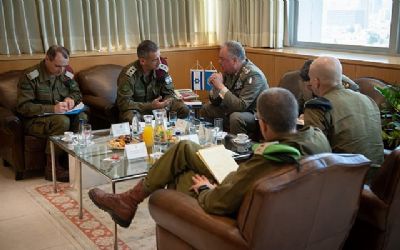 Kohavi conveyed this position in a meeting with Maj.-Gen. Stefano Del Col, the head of the UN's Interim Force in Lebanon (UNIFIL), following a clash along the border with Hezbollah on Sunday in which the terror group fired anti-tank guided missiles at Israeli positions near the security fence. No soldiers were injured, and the Israel Defense Forces retaliated by firing approximately 100 artillery shells and bombs at Hezbollah positions in southern Lebanon.

'We will not accept harm to our citizens or our soldiers, and we will not accept Hezbollah's precision missile project on Lebanese soil,' Kohavi told Del Col..."
Date
September 2, 2019
Title
IDF chief to UNIFIL: Stop Hezbollah’s missile program, or we will, The Times of Israel
Author(s)
Judah Ari Gross
Original Source
https://www.timesofisrael.com/idf-chief-to-unifil-stop-hezbollahs-missile-program-or-we-will/
Attachment
Click here to view this article in MS Word/PDF format