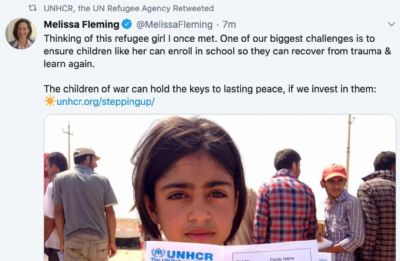 The OHCHR tweet that has since been deleted.
"The UN's newly appointed under secretary-general for global communications has been accused of an "astonishing" breach of confidentiality, after she tweeted an image of a child refugee that displayed personal details, including her family name, location and family's phone number.

The tweet, sent by Melissa Fleming, was retweeted by UNHCR to its 2.3 million followers over the weekend before being deleted. Fleming has since told the Guardian she is trying to locate the child's family to apologise.

Benjamin Thomas White, a historian specialising in refugees at the University of Glasgow, who alerted Fleming to the potential data breach via Twitter, has made an official complaint to the UNHCR's inspector general's office.

He accused Fleming and the UNHCR communication team of ignoring concerns over the privacy and safety of the child and her family, and of breaching the agency's data protection rules...

Some commentators on Twitter responded by criticising UN agencies for their 'unhealthy' communications culture, and 'careless' use of child images in publicity shots...

White said...'There are two issues. First is the way members of the humanitarian community use pictures and videos of the people they claim they are trying to help. The way they dehumanise them or actively endanger them. It is very common.'..."
Date
September 3, 2019
Title
UN communications chief under fire for tweeting refugee’s details, The Guardian
Author(s)
Karen McVeigh
Original Source
https://www.theguardian.com/global-development/2019/sep/03/un-communications-chief-under-fire-for-tweeting-refugees-details
Attachment
Click here to view this article in MS Word/PDF format