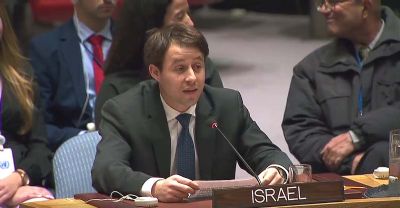 Israeli representative Yaron Wax at the United Nations (Israeli Mission to the United Nations)
"Thanks to a brilliant idea of a young diplomat on Israel's UN mission, Yaron Wax, Israel in late December torpedoed a Russian move at the UN, supported by the PLO, to approve an additional $17 million budget for the United Nations Relief and Works Agency for Palestine Refugees in the Near East (UNRWA), Ynet reported.

In 2019, for the first time, UN Secretary-General AntÃ³nio Guterres proposed to the Fifth UN Commission [sic, UN General Assembly Fifth Committee], which approves the organization's annual budget for 2020, to allocate $17 million to the International, Impartial and Independent Mechanism (IIIM) to assist in the investigation and prosecution of war crimes in Syria, mainly in the context of chemical weapons.
...
In an attempt to kill the Guterres proposal, Russia counter-proposed adding $17 million to UNRWA, which recently has been mired in scandals and corruption, and, like IIIM, relies on country donations for its funding.

Israel currently holds the post of Deputy Head of the Fifth United Nations Commission [sic, Rapporteur, UN General Assembly Fifth Committee] for the 2020 budget, as representative of the group of Western countries. Young diplomat Yaron Wax's suggestion was that if the Western countries voted in favor of increasing the UNRWA budget, Israel would insist on conducting an unprecedented vote on the entire UN budget. Traditionally, the UN budget always passes by consensus, without voting, and it is not common for a country to call for a vote-certainly not a small country like Israel.

The risk was that Israel would remain alone, or at most with US support, while the EU countries would vote in favor of the pro-PLO Russian proposal. But in the end, the Israeli gamble paid off, and behind the scenes negotiations began a few days before the end of 2019. In the end, the EU countries decided to oppose the Russian proposal, and so the PLO was forced to ask Russia to remove its own proposal, to avoid the European going on the record with a vote against UNRWA.