Secretary of State Mike Pompeo on the International Criminal Court: "We will not stand by as our people are threatened by a kangaroo court" 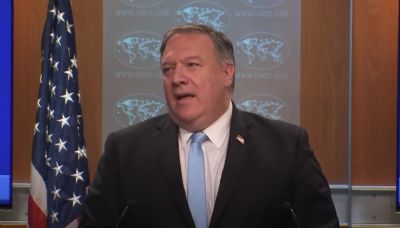 U.S. Secretary of State Mike Pompeo, June 11, 2020 (Screenshot)
"Imagine an American soldier, sailor, airman, Marine, or an intelligence officer is on leave with his or her family, maybe on a beach in Europe. And over the course of two decades or more, this soldier honorably defended America in Anbar Province, in Kandahar, taking down terrorists.

Then suddenly, that vacation turns into a nightmare. The European country's national police takes that soldier into custody, detaining him or her on politically motivated charges. A prison sentence abroad is a distinct possibility. A spouse behind bars for defending freedom. A son or daughter robbed of their mom or dad, all on the initiative of some prosecutor in the Netherlands.

Making sure this doesn't happen is the essence of America First foreign policy.

Sadly, this isn't a hypothetical. This nightmare could become reality if the International Criminal Court follows through with its ideological crusade against American service members. Many of you might recall back in November of 2017, the Court's Office of the Prosecutor announced its intention to investigate our brave warriors for alleged crimes arising from counterterrorism missions in Afghanistan.

It wasn't a prosecution of justice. It was a persecution of Americans. The ICC cannot subject Americans to arrest, prosecution, and jail. The U.S. is not a party to the Rome Statute that created the ICC. And even if a prosecution were to proceed, it would make a mockery of due process: There's no requirement for unanimity for a conviction. The prosecution can rely on hearsay to obtain a conviction. There's no real guarantee of a speedy trial. And instead of facing a jury of one's peers, it's a panel of judges who aren't subject to any American accountability.

We have responded any way â the way a responsible nation must: by condemning the investigation, by suspending cooperation with the court, and denying visas to those most directly responsible for going after our personnel.

... We cannot, we will not stand by as our people are threatened by a kangaroo court. And indeed, I have a message to many close allies around the world: Your people could be next, especially those from NATO countries who fought terrorism in Afghanistan right alongside of us.

We're also gravely concerned about the threat the court poses to Israel. The ICC is already threatening Israel with an investigation of so-called war crimes committed by its forces and personnel in the West Bank and in the Gaza Strip. Given Israel's robust civilian and military legal system and strong track record of investigating and prosecuting wrongdoing by military personnel, it's clear the ICC is only putting Israel in its crosshairs for nakedly political purposes. It's a mockery of justice.

More than 300 members of Congress â Republicans and Democrats alike â recently sent me letters asking that the United States support Israel in the face of the ICC's lawless, politicized attacks.

That's what the U.S. is dead set on doing, and with good reason. They're a trusted and wonderful partner and a buttress of American security. If a rogue court can intimidate our friend or any other ally into abrogating its right to self-defense, that puts Americans at risk as well. Absent corrective action, we can expect the ICC will continue its present, reckless course.

I've laid out the court's fatal process flaws, and the danger it poses to Americans and our allies. But we also oppose the court because it's grossly ineffective and corrupt. In 18 years of operation, the court â staffed by nearly 1,000 people â has secured only four convictions for major crimes, despite spending well over a billion dollars.

Nonetheless, the judges of the ICC recently brought suit against their own court, seeking a 26 percent pay raise from their 180,000 euro tax-free annual salary. That's about a quarter million dollars U.S., give or take.

This record of botched prosecutions and poor judgment casts grave doubt on the court's ability to function at the most basic level and demonstrates the highly politicized nature of this institution.

Which brings me to the reason we're all here today. The Trump Administration is taking the following actions:

First, we're authorizing the imposition of economic sanctions against ICC officials directly engaged in the ICC efforts to investigate U.S. personnel or allied personnel against that allied state's consent, and against others who materially support such officials' activities. Designations will be made on a case-by-case basis against specific individuals or entities.

And second, the United States is expanding visa restrictions for officials directly engaged in those same investigations. We're extending and expanding these restrictions to include their family members.

It gives us no joy to punish them. But we cannot allow ICC officials and their families to come to the United States to shop and travel and otherwise enjoy American freedoms as these same officials seek to prosecute the defender of those very freedoms..."
Date
June 11, 2020
Title
Remarks to the Press on the International Criminal Court by Secretary of State Michael R. Pompeo, Secretary of Defense Mark Esper, Attorney General William Barr, and National Security Advisor Robert O’Brien, U.S. Department of State
Original Source
https://www.state.gov/secretary-michael-r-pompeo-at-a-press-availability-with-secretary-of-defense-mark-esper-attorney-general-william-barr-and-national-security-advisor-robert-obrien/
Attachment
Click here to view this article in MS Word/PDF format