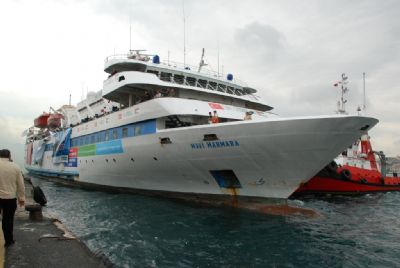 The Mavi Marmara flotilla ship (File photo courtesy Wikimedia Commons)
"The International Criminal Court on Wednesday closed for good the case of war crimes allegations against Israel concerning the 2010 Mavi Marmara incident in which 10 Turkish citizens were killed during a clash with IDF naval commandos.

This is the first time that the ICC Pretrial Chamber has thrown in the towel after appeals against the ICC prosecutor's decision to close the case.
...
While Israel's critics portrayed the Mavi Marmara passengers as having practically the status of UN peacekeepers, Bensouda declared their aim to be political.

She also dismissed any attempt by the ICC Pretrial Chamber to view Israel's blockade of Gaza as part of the war crimes' scenario, saying that analyzing this issue was inherently subjective.