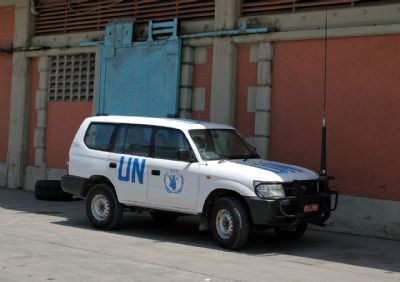 A World Food Programme vehicle (File photo courtesy of Wikimedia Commons)
"The Norwegian Nobel Committee awarded the United Nations World Food Programme (WFP) its annual Peace Prize for 2020 on Friday, overlooking a history of corruption, mismanagement, and sexual assault among its ranks.
...
Internally, an independent review of workplace culture in the WFP revealed a year ago that over two dozen people at the agency had experienced rape or sexual assault while on the job. The number of reported incidents of sexual assault more generally was significantly higher.

The study, conducted by consultants from the firm Willis Towers Watson (WTW), also found 'startling results concerning the experience of abusive behavior' more generally at the WFP. Consultants organized an anonymous survey of staffers at the company. Of those asked, 28 said they experienced 'rape, attempted rape, or other sexual assault,' about double the number who reported similarly throughout the entire U.N. Respondents reported higher rates of "abuse of authority' â 35 percent said they had seen it at the organization â where the term was defined as including 'overbearing supervision' and 'interference with career opportunities.' Another 29 percent said they experienced non-sexual harassment, including 'shouting and aggression' and 'spreading rumors.'

The report concluded that the WFP needed a 'systemic overhaul' of how it treats its employees. Shockingly, the rate of sexual assault revealed at the WFP by the survey was significantly lower than that of the United Nations generally...."
Date
October 9, 2020
Title
Nobel Prize-Winning U.N. World Food Programme Has Record of Rape, Poisoning Scandals, Breitbart News
Author(s)
Frances Martel
Original Source
https://www.breitbart.com/national-security/2020/10/09/nobel-prize-winning-u-n-world-food-programme-has-record-rape-poisoning-scandals/
Attachment
Click here to view this article in MS Word/PDF format