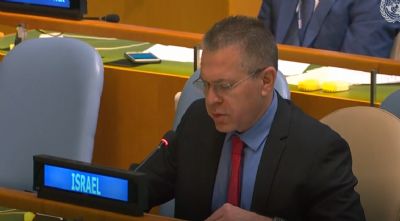 At issue was a November 2020 event hosted by Khalil as part of the UN Institute for Training and Research in New York titled, 'A Practical Look at the United Nations.'

Khalil is set to host the same seminar later this month and again in February.

In a letter addressed to Marco Suazo, head of the United Nations Institute for Training and Research (UNITAR) office, Erdan cited Khalil's comments regarding the infamous UN General Assembly Resolution 3379, approved in 1975 and revoked in 1991, which stated that Zionism equals racism.

Egypt initially voted for the resolution in 1975, when it passed by a 72-35 vote. In the aftermath of the 1979 peace deal with Israel, it modified its stance slightly and was absent for the 1991 vote in which the resolution was revoked by a vote of 111-25.

At the training event in November, Khalil 'noted that he was personally involved in efforts to prevent the rescinding of resolution in 1991, and expressed embarrassment and disappointment that Egypt did not participate in the vote following pressure from the US,' Erdan wrote.