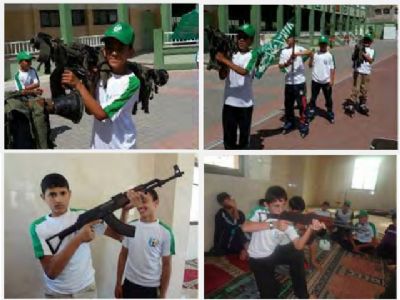 Images from a Hamas terrorist summer camp
"Back in 2017, Rep. Betty McCollum, D-Minn., introduced a House resolution to prohibit 'US assistance to Israel from being used to support the military detention, interrogation or ill-treatment of Palestinian children.' It included a proposed budget of $19 million for human rights NGOs to monitor the treatment of 12- to 17-year-old Palestinian youth detained by the Israeli military. Two years ago, a similar bill was introduced and we have no doubt that dozens of Democrats will join McCollum in 2021 to push this narrative which paints a picture of Israelis bent on seeking out innocent children to traumatize with the butts of their rifles or worse.

McCollum is right to raise the issue of the safety and trauma of children everywhere in the world, including the Holy Land. Tragically for targeted and abused Palestinian children, she is willfully blind to the main perpetrators â Palestinian adults, from genocidal Hamas that uses summertime to train child soldiers and to get children to fill balloons not with helium but with kerosene to float towards Israeli kindergartens, to the Palestinian Authority itself which spends more on its diabolical pay-to-slay Jews rewards program than it does on welfare for the poor.
...
Some of the main enablers of this sorry state of affairs, rife with danger for Palestinian children, lies within the nomenclature of the United Nations Relief and Works Agency, or UNRWA.

Scores of donor nations have donated billions to provide health care and education for an unheard of four generations of so-called refugees. Its schools operate in the West Bank, Gaza, east Jerusalem, Jordan, Lebanon and Syria. Under the protective cloak of the UN, these schools teach narratives that turn innocent children into haters and child soldiers, encouraging kids to put themselves in harm's way. Palestinian children are serially brainwashed in UNRWA schools to believe that all of Israel was stolen from them and they sing songs about how one day they will exterminate the Jews and return to their families' homes.