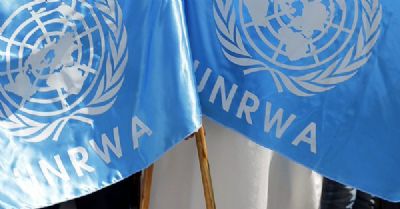 UNRWA flags (Photo courtesy social media)
"A February report by IMPACT-se shows that educational materials for Palestinian students have not been changed to be less anti-Israel since UNRWA promised it would tweak them back in November, when the UN organization in charge of Palestinian relief came under investigation for the materials.

Last month, Canadian Prime Minister Justin Trudeau was forced to answer for it in the Canadian Parliament. Canada has committed C$90 million ($72 m.) in the last year to UNRWA.

Since the report, the materials have actually been locked away, 'blocking further external scrutiny,' the report states.

Morantz quoted some examples, including encouraging Palestinian students to 'defend the motherland with blood,' and 'portraying child-murdering terrorists as heroes,' while depicting Israel as the enemy.

Trudeau responded that Canada's 'continued presence in UNRWA continues to ensure that the materials and the funds that are vehicled to the Palestinians' are done properly.

'The prime minister just said a moment ago that he'd stand up [against] antisemitism whenever and wherever it occurs,' Morantz shot back. 'Well, here it is â stand up to it!'..."
Date
February 25, 2021
Title
Canada deepens probe into UNRWA’s anti-Israel school textbook materials, https://www.jpost.com/diaspora/antisemitism/canada-deepens-probe-into-unwras-problematic-textbook-materials-660162
Author(s)
Sarah Ben-Nun
Original Source
https://www.jpost.com/diaspora/antisemitism/canada-deepens-probe-into-unwras-problematic-textbook-materials-660162
Attachment
Click here to view this article in MS Word/PDF format