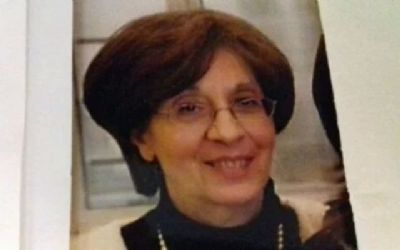 Sarah Halimi, 66, killed on April 4, 2017. (Courtesy)
"Israel blasted on Tuesday the ruling by France's highest court that the murderer of Sarah Halimi was not criminally responsible because he had smoked marijuana before the crime.

'Sarah Halimi was murdered for clearly anti-Semitic motivations, for the sole reason that she was a Jew,' said Foreign Ministry spokesman Lior Hayat to the Times of Israel. 'This was a despicable murder that harmed not only the victim herself and her family, but also the entire Jewish community's sense of security.'

'The way to confront anti-Semitism is through education, zero tolerance, and heavy punishment,' Hayat continued. 'This is not the message that the court's ruling conveys.'

Halimi, an Orthodox Jewish woman in her sixties, died in 2017 after being pushed out of the window of her Paris flat by neighbor Kobili Traore, who shouted 'Allahu Akbar' ('God is great' in Arabic).

But in a decision last Wednesday, the Court of Cassation's Supreme Court of Appeals upheld rulings by lower tribunals that Traore cannot stand trial because he was too high on marijuana to be criminally responsible for his actions..."
Date
April 21, 2021
Title
Israel blasts French ruling keeping Sarah Halimi’s killer from trial, The Times of Israel
Author(s)
Lazar Berman
Original Source
https://www.timesofisrael.com/israel-blasts-french-ruling-keeping-sarah-halimis-killer-from-trial/
Attachment
Click here to view this article in MS Word/PDF format