Holocaust Remembrance Day - has UN learned anything from history? 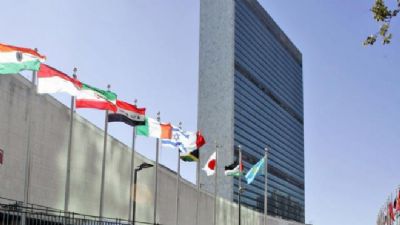 UN headquarters, New York City
It is Holocaust remembrance time at the United Nations. Once a year, Jews from around New York, a dwindling number of Holocaust survivors, occasional celebrities, and precious few friends, file into the General Assembly Hall and grant the U.N. the privilege of appearing to care. This year's speakers include Steven Spielberg. When it is over, the year-round ritual censure of the Jewish state will resume.

Characteristic of "International Day of Commemoration in memory of the victims of the Holocaust" is the scarcity of express emphasis on Israel, save for the remarks of the Israeli ambassador...The explanation, however, does not lie with general incompetence. For the organization has managed to devote its energy, time and resources to the denunciation and delegitimization of Israel â the embodiment of Jewish self-determination. Despite the fact that the U.N. was erected on the ashes of the Jewish people, the General Assembly has never adopted a resolution dedicated specifically to anti-semitism...In 2004, Israel proposed the adoption of a General Assembly resolution on antisemitism. And off-camera all hell broke loose....It threatened to undermine the very agenda being pursued so successfully at the U.N. itself. Modern anti-semitism encompasses the grotesque demonization of Israel, the U.N.'s Jew among nations...The Holocaust resolution was the consolation prize...Ironically, now the U.N.'s perceived antidote to criticism of the U.N.'s anti-Israel policies is Holocaust remembrance...Holocaust remembrance activities sponsored by the largest global platform for modern anti-semitism are more than paradoxical.

We will know if the U.N. has learned the lessons of the Holocaust when it does more than remember history's unique horror and its Jewish victims. When the General Assembly adopts a resolution dedicated to anti-semitism, commissions a report on its current manifestations, adopts recommendations for combating antisemitism in all its forms, and ensures their implementation. A strong Israel, supported by the community of nations, is the central remedial lesson of the Holocaust.
Date
January 27, 2014
Title
Holocaust Remembrance Day — has UN learned anything from history?, FoxNews.com
Author(s)
Anne Bayefsky
Original Source
http://www.foxnews.com/opinion/2014/01/27/holocaust-remembrance-day-has-un-learned-anything-from-history/
Attachment
Click here to view this article in MS Word/PDF format