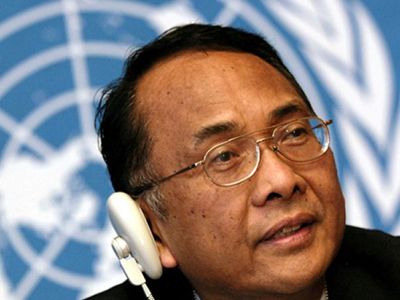 Makarim Wibisono
For over a month the UN's top human rights body has been struggling with a major dilemma. How much prior Israel-bashing experience is necessary to be appointed UN "independent expert" on Israel?

On May 7, 2014 we found out. Indonesian Makarim Wibisono has just the right mix of confirmed anti-Israel bias and diplomatic cover to replace outgoing UN "expert" Richard Falk.

Falk was a notorious antisemite, infamous 9/11 conspiracy theorist, and Boston-marathon apologist. But at the UN, a six-year time limit forced his retirement and not a matter of principle.

Former Indonesian UN ambassador Wibisono is from a country that does not recognize Israel's right to exist. He served as the President of the UN Human Rights Commission in its last year of operation in 2005 â a body which even UN Secretary-General Kofi Annan said "cast a shadow on the reputation of the United Nations system as a whole."

In a 2006 statement to the new Human Rights Council, Ambassador Wibisono, described Israel as showing "ruthless contempt for the lives of the innocent," perpetrating "callous attacks against terrorized and defenseless civilians," and so on.

A biography touts that up until January 2014 (and his application for the job) he was "active in the private sector as an advisor to the Third World Network." That NGO spews out hysterical antisemitic vitriol â such as, Israel is guilty of "bestiality, barbarity," AIPAC pays "cash and other perks" for "towing the Zionist line," and "the US plays the role of God in modern times" holding "back the sun to enable Israel...to finish the job" against its Arab victims.

And there's more. Wibisono's appointment was part of larger deal, because the UN Human Rights Council had nineteen openings for the job of UN human rights expert or "special rapporteur" on a variety of subjects.

Wibisono was not the top anti-Israel choice of Arab and Islamic countries. So at the same time as Wibisono got the nod, someone who had been slated to become the UN independent expert on the human rights of older persons, was suddenly denied the post. Who was he? Internationally-renowned Israeli professor of gerontology, Israel Doron.

And there's still more. Richard Falk lives to see another day. His wife and close professional "collaborator" â to use his words â Hilal Elver, will become UN Special Rapporteur on the right to food. Notwithstanding the generic title, as have past UN incumbents in this particular position, Elver can be counted upon to spend her time Israel-bashing from her new UN perch. Elver's writing circles right back to Falk, including references to the "Jewish lobby" and admiration for 9/11 conspiracy fans.

These UN jobs matter. Though they do not carry a salary, they do involve other perks: expenses, travel, status and most importantly â an instant global platform as the world's leading "expert" on the human rights subject at hand.

That is why Arab and Islamic states fight so hard to ensure anti-Israel discrimination is embedded into the system. An allegedly independent guru on human rights is a potent weapon in a systematic campaign to use lethal politics to destroy the Jewish state.

The sordid background to the appointment of Wibisono indicates how much better America's enemies play the UN game than the State Department.

In the case of the Israel rapporteur position, there were ten candidates. A consultative committee of five states, geographically representative, produced a short-list and ranked first, Christina Cerna. She was an international human rights lawyer with no known political views on the Arab-Israeli conflict. So the Arab and Islamic groups of states formally objected to Cerna on the grounds that she did not have the "relevant experience."

The Arab Group then put forward extremist Christine Chinkin as the candidate "with the relevant experience." Chinkin's "relevant" expertise included her prior membership on the infamous UN Goldstone committee, which declared that Israel deliberately intended to murder Palestinian civilians rather than act in self-defense against eight years of Hamas rocket attacks.

The Arab and Islamic choice was initially supported by the President of the UN Human Rights Council â who just happens to be from Gabon, a member of the Islamic group. When he ran into opposition, he chose Wibisono instead. His selection is to be confirmed by the Council on May 8, 2014.

Wibisono then emerges as the laughable "compromise."

In fact, no UN rapporteur on Israel could be independent. The 1993 UN job description says the mandate-holder must investigate only Israel's human rights violations. Investigating Palestinians is off limits.