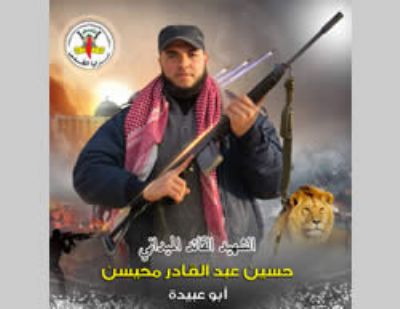 Hussein Abd al-Qader Muhaisen (Abu Ubeida), operative in the Al-Quds Battalions, the military wing of the PIJ
The findings of the current examination

1. This document is the second in a series of publications of the Intelligence and Terrorism Information Center (ITIC) examining the names of the Palestinians killed in Operation Protective Edge. The goal is to ascertain the identity of terrorist operatives and non-involved citizens, and to examine the ratio between them.

2. To date, the ITIC has examined the first 300 names on the Palestinian Health Ministry's lists. In its second examination, the ITIC examined another group of 150 names of Palestinians killed between July 12 and July 19, 2014, in the order in which the names appear on the Palestinian Health Ministry's lists (see Appendix C). The present examination also includes Palestinians killed during the first two days of the IDF's ground operation in the Gaza Strip (which began on July 17, 2014).

3. Based on our examination of the second group of 150 names on the Palestinian Health Ministry's list, we reached the following findings:

5. Below is a breakdown of 71 terrorist operatives identified by us, by organizational affiliation: