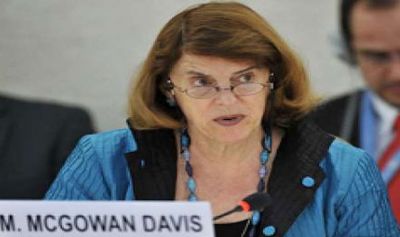 Mary McGowan Davis
"...I will not belabor the question of the legitimacy of your mission. I am certain that you are fully cognizant of the structural and historic bias of the UN Human Rights Council against Israel. If that and the prejudicial resolution establishing the mission did not deter you from accepting the position, nothing I say will convince you to resign. I assume you will at least acknowledge these predispositions, as Justice Goldstone did, even as you seek to assure that your group behaved even-handedly, its brief notwithstanding.

"One general admonition that can be derived from the 2009 report is that you -- the members of the mission whose name it will bear -- cannot simply accept as credible the drafts prepared by the staff hired to support you. It is very likely that many of the individuals volunteering or recruited for the task will have longstanding enmity towards Israel, as was the case in 2009 (although it was not known at that time). You may come under pressure to accept what they write because "they were the ones who spent the most time examining the evidence," but I hope you will be skeptical of anything that seems one-sided or is prejudicially phrased, lest you allow your reputation to be used to promote the agenda of others, as Justice Goldstone sadly did..."
Date
February 18, 2015
Title
Letter to Judge McGowan Davis and the UN Independent Commission of Inquiry on the 2014 Gaza Conflict, Gatestone Institute
Author(s)
Trevor Norwitz
Original Source
http://www.gatestoneinstitute.org/5229/judge-mcgowan-davis-un
Attachment
Click here to view this article in MS Word/PDF format