No to a UN-Imposed Settlement 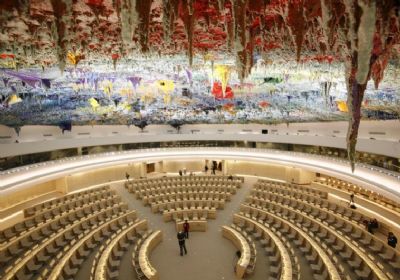 In agency after agency at the United Nations, Israel is a pariah, held to an impossible standard; it is judged as no other nation is judged.

At the United Nations, the US has for many years prevented one-sided measures from being imposed on Israel.

In the last few days, the White House has publicly stated it is reevaluating its long-held policy positions on the Israeli-Palestinian issue and might consider having the UN Security Council take center stage in seeking an outcome to the situation.

That would be a significant policy change and a cause for concern...

You can't point to very much that's positive the UN has done â over decades â to advance the cause of peace between Israel and the Palestinians. Indeed, it has often exacerbated the Arab-Israeli conflict, rather than promoting reconciliation by the parties.

From the infamous Zionism equals racism resolution adopted in 1975 (and only repealed 17 years later), to the creation of the special UN in-house committees promoting the Palestinian narrative, to the constant browbeating by the UN Human Rights Council â which also perpetuates the Palestinian narrative â and to the UN Relief and Works Agency for Palestine Refugees in the Near East (UNRWA), which has also perpetuated the narrative of Palestinian victimization, the list is long.

The UN is inhospitable territory for Israel, and attempts to impose any kind of arrangement will find few willing partners in Israel â even beyond the new government...

Based on some of the recent comments coming out of the White House, the administration appears to be considering what would be a dramatic departure from the hard work done by the US's UN ambassador Arthur Goldberg and the US delegation when they negotiated the language of Security Council resolutions 242 and 338. The two-state solution was never supposed to be predicated on the pre-June 5, 1967 armistice lines. The language of Resolution 242 clearly calls for Arab states to make peace with Israel, which all but Egypt and Jordan have yet to do, while Israeli withdrawal from territories was supposed to mean some, but not all, territories in dispute.

The administration now risks edging closer to more maximalist positions, which suggests an Israeli return to the 1967 frontier. To do so would be to reward Palestinian unilateralism; it could revise decades of US policy toward an ally and two painstakingly negotiated security council resolutions that have been on the books that entire time..."
Date
April 30, 2015
Title
No to a UN-Imposed Settlement, The Jerusalem Post
Author(s)
Daniel S. Mariaschin
Original Source
http://www.jpost.com/Opinion/No-to-a-UN-imposed-settlement-395648
Attachment
Click here to view this article in MS Word/PDF format