UNRWA Takes No Responsibility for Rocket Launchers in Shelters 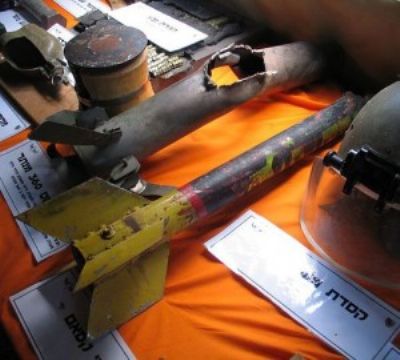 Remnants of Qassam rockets. Photo: Bukvoed via Wikimedia Commons
"UN Secretary-General Ban Ki-moon published a summary report of the Board of Inquiry on April 27 concerning the strikes from facilities of the United Nations Relief and Works Agency for Palestine Refugees in the Near East (UNRWA) in the Gaza Strip during Operation Protective Edge in July-August 2014...

A letter from the UN secretary-general was appended to the summary, in which Ban ... expressed his dismay that 'Palestinian militant groups would put United Nations schools at risk by using them to hide their arms.'

But the secretary-general's dismay should have included not only the 'militant groups' (Izz ad-Din al-Qassam Brigades) that imperiled UN facilities, but also that UNRWA employees in Gaza probably knew that the agency's facilities were being used to conceal Hamas weapons. Yet, they chose not to issue any warnings nor did they do anything about it. It would be inconceivable that the agency's employees were unaware that rockets and mortars were being stashed there. Hamas militants would not have been able to conceal the weaponry cache inside UNRWA schools and storerooms without the agency's employees seeing the activity or possibly even assisting.

Since the June 2007 coup staged by Hamas in the Gaza Strip, there has been a reciprocal relationship between UNRWA and the movement...UNRWA, unfortunately, appears to serve as a fig leaf, whose existence allows Hamas to control Gaza while letting UNRWA shoulder the burden of civilian responsibility as a representative of the United Nations.

Eight months have passed since the conclusion of Operation Protective Edge and the UN has yet to learn the lessons or take responsibility for the fact that its agency's facilities and storerooms, including the schools that were designed to support the Palestinian population in Gaza, served as Hamas weapons depots. The UNRWA director in Gaza, Robert Turner, should have taken responsibility for putting the civilians at risk; he should have either resigned or been dismissed."
Date
May 1, 2015
Title
UNRWA Takes No Responsibility for Rocket Launchers in Shelters, Al-Monitor
Author(s)
Shlomi Eldar
Original Source
http://www.al-monitor.com/pulse/originals/2015/04/israel-gaza-operation-protective-edge-inquiry-un-unrwa-hamas.html
Attachment
Click here to view this article in MS Word/PDF format