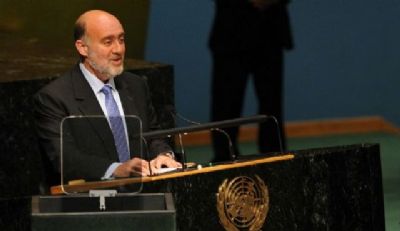 Israeli Ambassador to the UN (GPO)
"Israel's ambassador to the United Nations, Ron Prosor, sent a letter of complaint Wednesday to United Nations Secretary General Ban Ki-moon in which he accused the secretary general's special representative for children and armed conflict, Leila Zerrougui, of bias against Israel.

Prosor accused her of attempting to hide the fact from Israel that she was writing a report about harm suffered by children in the West Bank and Gaza Strip...

In his letter, Prosor noted a number of deficiencies in the drafting process of the chapter of the report on Israel. Zerrougui, he stated, wrote it together with pro-Palestinian organizations that had what he said was a clear anti-Israeli agenda that includes promoting the boycott, divestment and sanctions movement against Israel. Some of the groups even have contacts with Hamas, he added.

Zerroughi and her associates, he said, nearly completely headed off any effort by Israel to present different facts to provide balance in the report. It is therefore not surprising, the Israeli ambassador stated, that Israel appears in the report more than ISIS, Taliban or Al-Qaida, while Hamas is absent from it entirely, he claimed. It was as if the report was designed to strengthen a regular anti-Israel stance and satisfy politically interested parties at the UN, he said..."
Date
June 18, 2015
Title
Israel Complains to UN: Report on Palestinian Children Biased, Kept Secret from Israel, Haaretz
Author(s)
Barak Ravid
Original Source
http://www.haaretz.com/news/middle-east/.premium-1.661894
Attachment
Click here to view this article in MS Word/PDF format