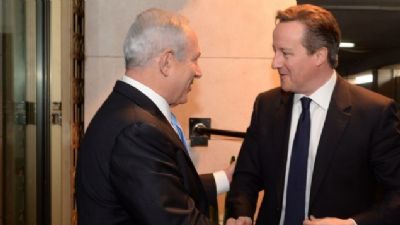 According to the Jewish Chronicle report, Jerusalem was concerned that if the resolution was shot down, a reformulated draft would be tougher on the Jewish state.

The Israeli Foreign Ministry all but denied the allegations Monday, saying it was opposed to the resolution, as stated in Jerusalem's official response.

British Prime Minister David Cameron believed the request was 'pure madness,' a source close to the prime minister said, but went along with it...

The Israeli Foreign Ministry said it opposed the resolution in a statement, but conceded that Jerusalem had asked its allies to ensure a harsher formulation was avoided.

'Israel announced to all the members of the Human Rights Council that it is strongly opposed to the resolution that was adopted, as was expressed in the State of Israel's formal response,' it said. 'At the same time, Israel asked the members of the council to ensure that the proposed text is not made harsher...'"
Date
July 6, 2015
Title
Report: Israel Asked UK to Vote in Favor of UN Gaza Resolution, The Times of Israel
Author(s)
Times of Israel Staff
Original Source
http://www.timesofisrael.com/report-israel-asked-uk-to-vote-in-favor-of-un-gaza-resolution/
Attachment
Click here to view this article in MS Word/PDF format