There Goes the International Criminal Court 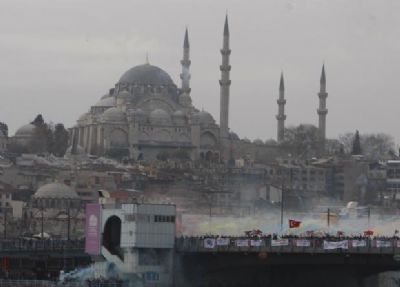 Pro-Palestinian activists hold smoke torches as they shout anti-Israeli slogans during the welcoming ceremony for cruise liner Mavi Marmara at the Sarayburnu port of Istanbul December 26, 2010. (Osman Orsal/Reuters)
"The International Criminal Court (ICC) was an experiment. From the beginning its potential success was threatened, as all United Nations-linked bodies are, by the danger of falling into U.N. Human Rights Council-like obsessions with Israel. Such actions would delegitimize the new ICC, certainly for Americans and anyone else taking a fair look at its activities...

When various groups tried to get the ICC to take on the case of the Mavi Marmara (the Turkish vessel that tried to break the Israeli sea blockade of Gaza in 2010, with a resulting battle where nine were killed), [ICC chief prosecutor Fatou Bensouda] looked into it and said no.

Such a decision by the Prosecutor has never been overridden in the ICC's history-until now. And of course in a case involving Israel. In a 2-1 ruling, the 'Pre-Trial Chamber' set aside her decision and said the Prosecutor has to move forward with the case.

But what if she found no reason to do so, and no evidence suggesting crimes the ICC should prosecute? No matter; when Israel is concerned, new rules will be made up...

With this ruling, the ICC has degraded itself to the condition of the U.N. Human Rights Council and other U.N. bodies. It has thrown law out the window to lend itself to politics and the pursuit of Israel. It has sent a message to the PLO that the door is open to go after Israeli officials.

And it has put paid to the idea that a neutral and respected court of international criminal law can be created."
Date
July 18, 2015
Title
There Goes the International Criminal Court, Newsweek
Author(s)
Elliot Abrams
Original Source
http://www.newsweek.com/there-goes-international-criminal-court-355001
Attachment
Click here to view this article in MS Word/PDF format