US Lawmakers Rail Against 'Inappropriate' UN Vote on Iran Deal 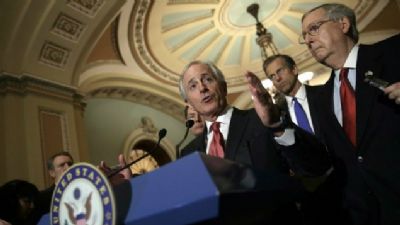 Sen. Bob Corker of Tennessee (center), the Foreign Relations Committee chairman, at a Washington news conference in March 2015 (Win McNamee/Getty Images via JTA)
"A powerful US senator leading the charge against the nuclear deal with Iran decried the Obama administration's decision Monday to endorse the deal at the United Nations before Congress had a chance to review the pact.

As chair of the committee at the center of the 60-day Senate review of the deal, Corker will be leading the review hearings for the Senate, and his committee is expected to be the point of origin for a resolution of approval or disapproval of the Iran deal itself.

'The administration's decision to endorse this agreement at the UN prior to a vote in Congress on behalf of the American people is contrary to the spirit of the Iran Nuclear Agreement Review Act, which was supported by overwhelming majorities of the House and Senate and signed by the president,' he said in a statement...

While it is not clear how many Democratic legislators are considering voting against the agreement itself, some have already questioned the president's quick turn to the UN before the Congressional review period concludes.

In a bipartisan show of concern, Representative Ed Royce, Republican chairman of the House Foreign Affairs Committee, and Representative Eliot Engel, a Democrat and the committee's ranking member, issued a joint bipartisan statement saying that the two were 'disappointed' about the passage of the United Nations Security Council resolution.

'We are disappointed that the UN Security Council passed a resolution on Iran this morning before Congress was able to fully review and act on this agreement,' the two wrote. 'We are also greatly concerned that the resolution lifts restrictions on Iran's ballistic missiles in eight years and conventional arms in five years. Regardless of this morning's outcome, Congress will continue to play its role...'

House Democratic whip Steny Hoyer ... said that he believes 'that waiting to go to the United Nations until such time as Congress has acted would be consistent with the intent and substance of the Iran Nuclear Agreement Review Act.'

Hoyer is Minority Leader Nancy Pelosi's right-hand man and his concern over the UN process was striking, given Pelosi's own quick support for the deal itself."
Date
July 20, 2015
Title
US Lawmakers Rail Against ‘Inappropriate’ UN Vote on Iran Deal, The Times of Israel
Author(s)
Rebecca Shimoni Stoil
Original Source
http://www.timesofisrael.com/us-lawmakers-rail-against-inappropriate-un-vote-on-iran-deal/
Attachment
Click here to view this article in MS Word/PDF format