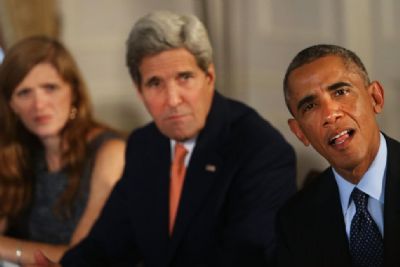 UN Ambassador Power (L), Secretary Kerry, President Obama (R) (file photo)
Oops, we forgot the American hostages in Iran. After we handed Iran $150 billion dollars in sanctions relief. That's the impression the Obama administration is now trying desperately to shake off while selling an Iran nuclear deal that left our fellow citizens behind.

On Monday, the administration pushed the Iran deal through the UN at warp speed in order to blackmail Congress with America's newly-created international legal obligations. Speaking at the Security Council, Ambassador Samantha Power threw the following into the middle of her self-congratulatory remarks:

"Let me use this occasion to call once again on Iran to immediately release all unjustly detained Americans . . . I also call on Iran to help locate Robert Levinson, who has been missing from Iran since 2007."

Saeed Abedini is imprisoned for his religious beliefs. Amir Hekmati is a former sergeant in the U.S. Marine Corps falsely accused of espionage. Jason Rezaian is a Washington Post correspondent who once covered the nuclear negotiations. And Robert Levinson is a retired FBI agent.

So on the one hand, Power was leading the charge to revoke a decade of Security Council resolutions - harsher than the new deal - that imposed duties on Iran to "suspend all enrichment-related activities" until "Iran has fully complied with its obligations..." And on the other hand, she was begging Iran to release Americans from Iranian hell holes. It was an embarrassing spectacle.

Hitting the Iran-deal campaign trail on Tuesday, President Obama followed up with similar bluster. The President told to the VFW National Convention in Pittsburgh that Rezaian, Abedini and Hekmati "should be released" and "Iran needs to help us find Robert Levinson." The only thing missing was the "pretty please."

Meanwhile, the Iranians attached to the deal every non-nuclear barnacle - like freedom for ballistic missile production - that they could.

A clearer explanation is provided by the mindset adopted by the White House and the State Department throughout the negotiations and articulated by Power at the Security Council. In her words, in arriving at the deal U.S. and Iranian negotiators "demonstrated" "mutual respect."

The theme was a huge hit at the United Nations - especially with the countries having no respect either for the human rights of their own citizens or those of their neighbors. China talked about "the principle of mutual respect" and "equality." Russia waxed eloquent about the deal being "a choice . . . in favor of mutual respect, stability and cooperation." Venezuela carried on about "mutual trust and respect" between Iran and the parties. And Iran crowed "the deal was sealed on the basis of mutual respect."

When there is mutual respect between the world's leading democracy and the world's leading state sponsor of terrorism, something has gone terribly wrong. Abedini, Hekmati, Rezaian, Levinson and their families are paying the price - along with the victims and targets of Iranian terror all around the world.