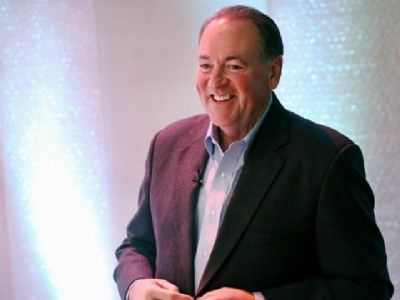 Former Arkansas Governor Mike Huckabee
When former Arkansas Governor Mike Huckabee raised the specter of the Holocaust in his evaluation of President Obama's Iran deal, he touched a raw nerve because Huckabee got it right: The Holocaust taught us that evil is not satiated after it consumes Jews. A deal that is catastrophic for Israel is also catastrophic for the United States. The Governor reminded us that imagining the deal means losing some purportedly tolerable number of American servicemen to Iranian terror, somewhere "over there," is morally and empirically wrong.

Critics, however-starting with the President-jumped on the Governor's remarks â misread and misrepresented. What the Governor actually said to Breitbart News on July 25, 2015 was as follows: "This president's foreign policy is the most feckless in American history. It is so naive that he would trust the Iranians. By doing so, he will take the Israelis and march them to the door of the oven."

In response to the critics, Huckabee refused to be cowed. He subsequently told reporters and tweeted: "The last time the world did not take seriously threats against the Jewish people, just before World War II, this ended up in the murder of six million Jews... For decades, Iranian leaders have pledged to 'destroy,' 'annihilate,' and 'wipe Israel off the map' with a 'big Holocaust.'" "What's 'unacceptable' is a mushroom cloud over Israel," he added. "If we don't take seriously the threats of Iran, then God help us all."

President Obama, anxious to court American Jews to support the deal â and New York Senator Chuck Schumer in particular â responded with alacrity from a trip abroad in Ethiopia: "The particular comments of Mr. Huckabee are, I think, part of just a general pattern that we've seen that is - would be considered ridiculous if it weren't so sad."

Huckabee shot back via Twitter: "What's 'ridiculous and sad' is that @POTUS does not take Iran's repeated threats seriously."

The accuracy of Huckabee's reply was corroborated by Secretary Kerry within a day, when Kerry testified at the House Foreign Affairs Committee this week. Over and over, Kerry was asked by Congressmen about the dangers of Iran in the here and now.

Congressman Rep. Steven Chabot (R-OH): If this is such a good deal, why is Israel so opposed to it?

Secretary Kerry: First of all, I understand when you say Israel, there are people in Israel who support it...There are concerns about the region they live in, about the nature of the rhetoric that's used...

Congressman Rep. Ted Poe (R-TX): Is it the policy of the ayatollah...that Iran wants to destroy the United States? ...Do you think it's their policy to destroy us?

Secretary Kerry: I think they have a policy of opposition to us and a great enmity. But I have no specific knowledge of a plan by Iran to actually destroy us.

In other words, the Prime Minister of a democratic state, a close ally, and three-quarters of Jewish Israelis from all political stripes who are opposed to the deal were dismissed, along with the insufficiently specific "rhetoric."

The militarization of Iran's nuclear program, Kerry suggested in the same hearing, was all in the past. "We know what they were doing, we've already drawn our conclusion about 2003. We know they were engaged in trying to make a weapon." So this deal literally gives Iran a do-over.

Downplaying the evil intent of Iran isn't just fuzzy thinking. This posture has formed the essence of the President's foreign policy from the moment he took office and is critical to appreciating the catastrophic nature of the deal.

As early as March 2009, President Obama produced a video in which he directly addressed the "leaders of the Islamic Republic of Iran" seeking "engagement grounded in mutual respect." When his vision finally culminated last week in the overthrow of the entire hard-won UN sanctions regime, Ambassador Samantha Power boasted that negotiators "demonstrated" "mutual respect."

Governor Huckabee is telling us: stop whatever you're doing, and let that sink in. Mutual respect for a regime overtly committed to genocide against the Jewish state.

After the President ridiculed the Governor for his own political purposes, there were other politically tinged responses.

Marvin Hier, Dean of the Simon Wiesenthal Center, told CNN, "...the only way we're going to win this is with bipartisan support...[W]hat [Huckabee] said...is hardly the way to achieve that bipartisan support." Huckabee's political rival Jeb Bush told MSNBC: "This is not the way we're going to win elections..." The Israeli Ambassador to the U.S., Ron Dermer, called Huckabee's words inappropriate while explaining to USA Today that "he had met with dozens of congressional Democrats because 'I think ultimately they may decide whether this deal goes through or doesn't go through.'"

Critics of Huckabee worried that Democrats would defend their president if his honor was at stake, regardless of the demerits of the deal. Seeking precisely such an outcome, the President had twisted Huckabee's words into a personal assault devoid of substance. From Ethiopia, the President said: "we just don't fling out ad hominem attacks like that." Instead of addressing Iran's illegal, evil intentions and deeds, or Iran's lack of mutual respect for diversity of any kind, the President made the critique of the deal all about himself.

It is also exactly the opposite of the lesson that ought to be drawn from the Holocaust.

In 1939, when Hitler spoke of "the end of the Jews" of Europe, precious few took seriously his genocidal intent. Just days ago, Iranian leader Ayatollah Ali Khamenei told a chanting crowd: "You heard 'Death to Israel,' 'Death to the US'... So we ask Almighty God to accept these prayers by the people of Iran." Last year, Khamenei said "this barbaric... regime of Israel... has no cure but to be annihilated."

It is time that the Obama administration stopped calling these statements "rhetoric" and stopped pretending that the subject at hand is Mr. President.

The subject at hand is an enemy that is the leading state sponsor of terror; today openly advocates genocide; funds the killers of Israelis; tortures Americans in its prisons; and stays in power only through brutality and mass disenfranchisement. An enemy that was caught red-handed trying to acquire nuclear weapons and has spent years continuously violating nuclear non-proliferation laws.

The subject is a deal that puts billions into the hands of this deadly foe. A deal that promises Iran an end to an arms embargo when the previously entrenched Security Council regime had no time limit and was not about to expire. A deal that grants Iran a right to enrich that was denied under the now defunct legally binding resolutions.

The President's deal, with this enemy, takes Israel to the brink of a catastrophe of Holocaust proportions. What else should we call nuclear war?