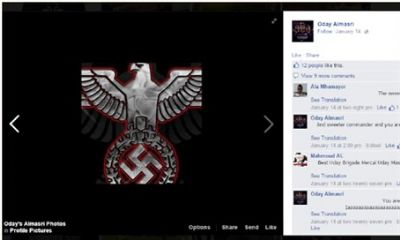 Facebook post of an UNRWA teacher (Elder of Ziyon)
"Teachers working at United Nations Relief and Works Agency (UNRWA) schools in Gaza, Judea and Samaria, Lebanon and Jordan have received no disciplinary action for supporting anti-Semitism and terrorism on social media, the Elder of Ziyon blog has revealed in an ongoing investigative report.

According to the blog's findings, the teachers often published Facebook posts against the Jewish state and in support of terrorist activity. Even a director of one of UNRWA's schools was complicit, praising a terror attack carried out in 1978. Other questionable uploads include a picture from Oday Al Masri, an UNRWA teacher in Jenin, featuring a swastika.

The organization responded by telling teachers to tone down the hate-fueled posts, concerned more with its reputation than the terrorism and anti-Semitism its employees were promoting.

In response, several teachers removed their affiliation with UNRWA on their Facebook accounts and/or changed their privacy settings. Several pages, as well as an UNRWA teacher's group featuring jihadist videos, were also taken down.

However, no teachers have been dismissed or even reprimanded for their actions..."
Date
August 20, 2015
Title
UNRWA to Probe Teachers’ Anti-Semitic Posts, Arutz Sheva
Author(s)
Cynthia Blank
Original Source
http://www.israelnationalnews.com/News/News.aspx/199644#.Vdkm5puFOM_
Attachment
Click here to view this article in MS Word/PDF format