UN Official Who Praised "Martyrs" is Hurt By Palestinian Stoning, Says "Allah Will Forgive Them" 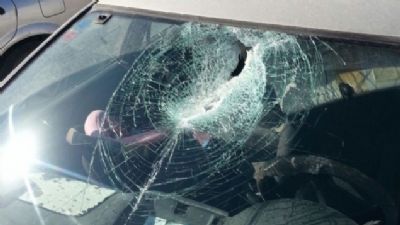 Damage to a car pelted with stones outside Jerusalem on September 20, 2015. (Courtesy)
"A senior United Nations official who was injured when Palestinians threw rocks at his car wrote on Facebook that 'Allah will forgive the rock throwers.'

Mounir Kleibo, who heads the UN bureau of the International Labor Organization in the Palestinian Territories, sustained serious injuries to his jaw after coming under attack by Palestinian rock throwers in East Jerusalem on Friday...

A report in the Hebrew-language NRG website noted that Kleibo's Facebook profile was overtly pro-Palestinian, despite his being a UN official.

Kleibo's cover picture shows the dome of the al-Aqsa Mosque on Jerusalem's Temple Mount and his profile picture is the word 'Shuhada' ('Martyrdom') on a black background.

In one of his posts, Kleibo wrote, 'We mourn not only our shahids but also ourselves, our eyes, our hearts, our consciousness and our humanity.'...

A Foreign Ministry official told NRG that it was 'regrettable that the UN did not explicitly condemn all Palestinian stone throwers, who hurt, among others, a senior UN official.'

'One can be even sorrier that the same official, a victim of Palestinian violence, continues praising it on his Facebook page,' the official added..."
Date
October 12, 2015
Title
UN Official Hurt in Stoning: ‘Allah Will Forgive Them’, The Times of Israel
Author(s)
Times of Israel Staff
Original Source
http://www.timesofisrael.com/un-official-hurt-by-rock-throwers-allah-will-forgive-them/
Attachment
Click here to view this article in MS Word/PDF format