Rouhani: No Need for Parliament Vote on Nuke Deal 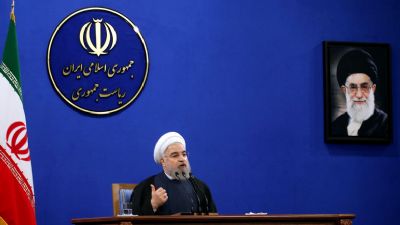 Iranian President Hassan Rowhani delivers a speech during a press conference in the capital Tehran on August 29, 2015. (AFP)
"President Hassan Rouhani said Saturday he opposes a parliamentary vote on the landmark nuclear deal reached with world powers because terms of the agreement would turn into legal obligations if passed by lawmakers.

Rouhani told a news conference that the deal was a political understanding reached with the five permanent members of the U.N. Security Council and Germany, not a pact requiring parliamentary approval. The deal also says Iran would implement the terms voluntarily, he said.

'If the Joint Comprehensive Plan of Action is sent to (and passed by) parliament, it will create an obligation for the government. it will mean the president, who has not signed it so far, will have to sign it,' Rouhani said. 'Why should we place an unnecessary legal restriction on the Iranian people?'..."
Date
August 29, 2015
Title
Rouhani: No Need for Parliament Vote on Nuke Deal, Al Arabiya News
Author(s)
AP
Original Source
http://english.alarabiya.net/en/News/middle-east/2015/08/29/Rowhani-Iran-nuke-deal-doesn-t-need-parliament-approval.html
Attachment
Click here to view this article in MS Word/PDF format