When Will the UN Be Held to Account for Failing to Protect Civilians? 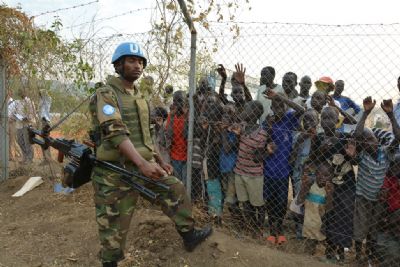 UN peacekeeper in South Sudan (File photo)
"This month, the UN office of the high commissioner for human rights revealed the massive scale of abuse against civilians in South Sudan last year. Its report is unflinching in describing rape, killing and torture â all part of what it calls a "scorched earth policy" against civilians by government forces... However, the report fails to raise questions about the UN's own accountability in situations such as these.

The UN mission in South Sudan (Unmiss) is made up of 12,500 peacekeepers under a Chapter VII mandate to protect civilians... [T]he recent report is surely testament to the failure, at least in part, of this mandate, cataloguing horrific abuses against thousands of civilians...

Unmiss is accused of failing to react to what is described as systematic targeting of civilians... [A]t what point is a mission aimed at protecting civilians classified as a failure?

The key missing element here is the lack of a culture of accountability. The UN is grappling with its internal mechanisms for holding peacekeepers accused of sexual abuse to account... As an unelected yet influential body, the UN has always been in danger of lacking legitimacy with those it is meant to serve. Member states must drive processes of accountability, yet they will also be the ones who are found to be culpable in some cases. Therein lies the problem..."
Date
March 23, 2016
Title
When Will the UN Be Held to Account for Failing to Protect Civilians?, The Guardian
Author(s)
Hannah Bryce
Original Source
http://www.theguardian.com/global-development/2016/mar/23/un-united-nations-held-to-account-for-failing-to-protect-civilians-south-sudan?utm_content=bufferc87f9&utm_medium=social&utm_source=twitter.com&utm_campaign=buffer
Attachment
Click here to view this article in MS Word/PDF format